PATIENTS RISING’S NEW YEAR’S RESOLUTION: “THE YEAR OF THE PATIENT”

Patients Rising has a 2017 Resolution, and we’ll be sticking to it: Make this The Year of the Patient.

Every patient should have access to the right treatment at the right time. Seems like a universally accepted principle of health care, right?

Under step therapy, health insurance companies force patients to try a less expensive treatment first — even if that treatment contradicts their doctor’s recommendation.

As our policy director Jonathan Wilcox explains, medications, especially treatments for cancer, aren’t easily interchangeable. “Substituting one for another is not the same as swapping out a Coke for a Pepsi and then having an RC Cola. Even the difference of a few nanoparticles can have profound consequences for a patient.”

New Jersey oncologist Dr. Kenneth B. Blankstein describes the policy as “just insane.” “The patient’s being told to use a drug we know isn’t going to work, but we have to use it anyway for someone with terminal illness? To me that’s just insane, but it’s the way they do things,” he told Stat News. “It’s taken away clinical judgment. It’s managing by algorithms.”

Earlier this year, our national Patients Rising survey, which was conducted in partnership with CancerConnect, found that 77 percent of patients believe that step therapy causes cancer patients to take potentially ineffective treatments instead of the therapy prescribed by the oncologist. In an effort to bring the patient’s voice to the debate, we organized our “Voices of Value” series to bring together patients from across the country: Cardiovascular patients in New Orleans psoriasis sufferers in Boston, a migraine population in Scottsdale and those being treated for blood cancers in San Diego.

Joanne Smith of New Orleans is a patient with chronic high cholesterol (and the cardiology challenges that go with it). She explained how her insurance company forced her to continue using a class of medications called statins against the advice of her doctor and while she suffered in pain. “I was so, so weak … my pain was much more severe,” she said of the side effects from her statins.

Patients living with psoriasis know exactly what she went through. Dani Yevsa is from New York, living with psoriatic arthritis. She testified that she was told by her insurance company she needed to spend months “trying” an ineffective treatment. In the effort to reduce short-term costs, her health care provider forced her to fail first with a less costly and less effective treatment.

Numerous illnesses and infections from her already compromised immune system followed. She started missing work. Eventually, she lost her job, as did her husband, who was her primary caregiver. 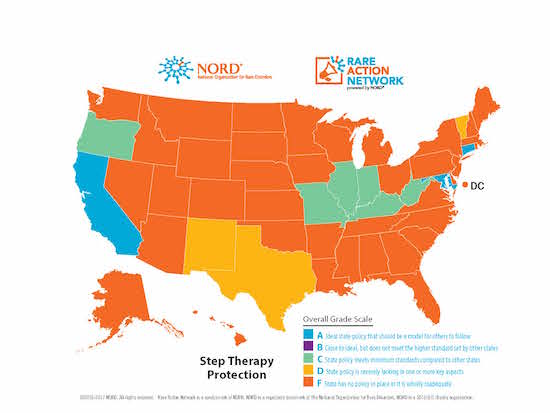 “The people at my insurer had no medical degrees. Yet they had all the power to decide what medicine I had access to.”

Dani decided to do something about it.

With the help of the Global Healthy Living Foundation, she urged New York state lawmakers to change the law. Effective January 1, patients in New York have more rights to challenge the use of step therapy.

New York’s new step therapy law doesn’t ban the practice outright, but forces insurance companies to justify their actions. According to The National Pain Report, “Under the bill, insurers must respond to step therapy appeal requests within 72 hours and 24 hours in emergency situations to prevent unnecessary delays in critical care for patients.”

Although patients are making progress, there’s still more work to be done. According to a report by National Organization of Rare Disorders’ Rare Action Network, more than 80 percent of the country received an “F” for their step therapy laws. Just 3 states received an A.

Do you live in a state that forces patients to fail first? Have you been forced to suffer through step therapy? We want to hear from you. Let’s work together to end step therapy and help every patient gain access to the right treatment at the right time.