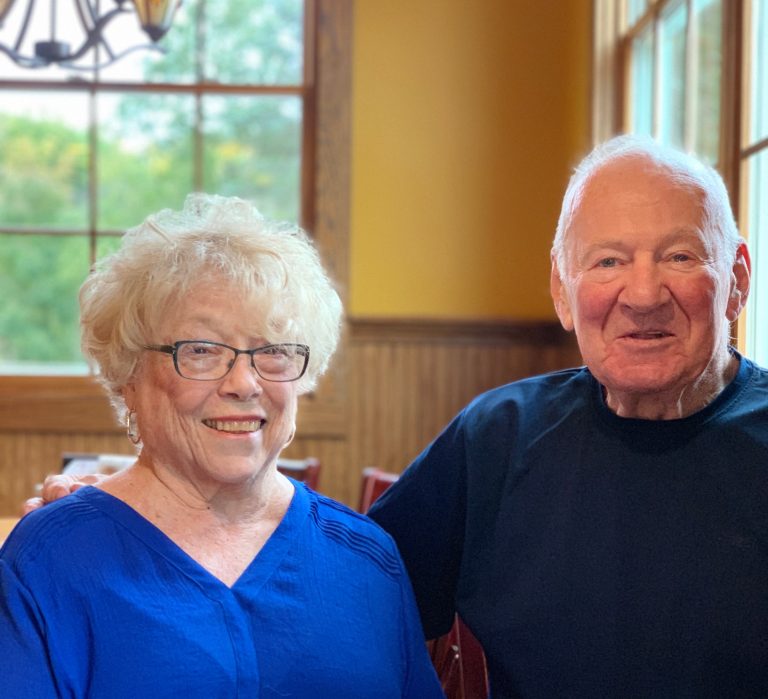 To succeed as a patient in America, you cannot afford to be passive. Today Kate has a conversation with June and her husband Kenny who have been actively self advocating ever since June got sick. It’s the only way she could ever have been seen with an invisible illness. Here’s Kate, in a story from the olden times when you could sit across from someone in a pub…

I sat down with June on a quiet Thursday at her local town pub. It was a restaurant she frequented often, given away because she knew both the waitress by name and the menu by heart. June and I had become acquaintances a few years ago through family get-togethers during the summers. After hearing of her troubles and the mountains she climbed to find resolutions to her health, I was excited to meet her and see what she had experienced.

Is it age or something else?

Since the 1990s, June has been overwhelmed with diagnoses. At first, she attributed her symptoms to getting older. She noticed her vision changing, her muscles becoming weaker, and a growing feeling of exhaustion. But this was what happened after turning 50 – right?

Things took a turn for the worse when she was out with friends for a night at the movie theater. On the way home, June was driving a packed car. Suddenly, her vision became doubled, and she wasn’t able to see the exit signs. Realizing that this was something more significant than age alone, she began to seek answers, soon leading her down a long road towards diagnosis.

Initially looking to her optometrist for answers, she was able to have laser surgery to tend to the symptoms of blurriness, double vision, and limited depth perception. But something still wasn’t right. After a visit to a neurologist in Worcester, Massachusetts, June was diagnosed with Myasthenia gravis.

A neuromuscular and auto-immune disease, Myasthenia gravis (MG) progressively weakens the skeletal muscles in the face. There are treatments available, but as June noted, many have disparaging side effects, usually associated with steroids.

Even after this diagnosis, June recalled, “I just always felt like I had the flu.” One day, as she was headed to work upstairs at her beauty salon, her primary care provider called her to visit his office. He was a local physician that she had grown to know well from repeated visits from recurring symptoms.

“He said to me, ‘I know what you have. It’s either Sjogren’s syndrome or lupus.’”

June considered herself lucky when a lip biopsy determined it was the former of the two. Sjogren’s syndrome is an auto-immune disease, primarily impacting the eyes and nose. Though it can be manageable, it took years for June to get her symptoms of MG and Sjogren’s under control. June had commonly visited the doctor every two weeks since the time of her diagnosis to finding a reliable treatment plan.

As her symptoms came under control, the list of medications she was prescribed continued to grow.

Today, June takes about 15 daily medications for her symptoms of MG, Sjogren’s, pseudogout in her knees, neuropathy, arthritis, and pre-diabetes. As you might imagine, this can come at a tremendous out-of-pocket cost to June and her husband, Kenny.

Even after working with prescription assistance programs like Takeda’s Help at Hand program, or the HealthWell Foundation, June would find herself reaching the edge of the Medicare coverage gap. Otherwise known as the “donut hole,” June was expected to pay 25% or more of all her prescription drug coverage until her costs exceeded $5,000. For those on limited incomes, pensions, or receiving social security, it would be nearly impossible to budget these expenses or to plan for a medical emergency.

While the coverage gap is set to close in 2020 under the provisions of the Affordable Care Act, drug prices have continued to rise ahead of the rate of inflation. Unpredictable costs leave patients wondering whether their prescriptions will be covered, or if they will need to change their treatment plans to accommodate rising co-pays.

Self Advocating Isn’t Easy…But It’s Worth It

When asked what would have improved the quality of her life, June was quick to bring up an issue that is often overlooked – in-home assistance and home modifications. Typically not covered under insurance, structural modifications for homes such as ramps or accessible bathrooms are a necessity of independence for those with mobility challenges. While non-profit assistance programs exist, relying on charity is an unreliable path, often resulting in hours consumed with research and applications for funding.

As our time together ended, I was left struck by the amount of research June had done to seek diagnosis, treatment, and payer negotiations. For the past 30 years, the solutions she has found to “make it work” were not handed to her in a small brochure. It required an active commitment to communicating with doctors, insurers, pharmaceutical companies, and her support system. There will always be uncertainty about what could be around the corner, and that uncertainty has a profound impact on anxiety and quality of life. Her quality of life better, her symptoms are well controlled, and much of that is due to June’s self advocating.

Kate Pecora is a graduate of the University of Massachusetts Amherst where she studied Healthcare Policy and Political Science. She is an advocate for rare diseases, primarily in the neuromuscular space. Kate is diagnosed with Spinal Muscular Atrophy Type III. She is currently (e)traveling across the country in search of the most compelling stories of patient access, affordability, and quality. Ultimately this will become a book that will educate students on the importance of patient perspective. Instagram Facebook Twitter

Having the tools for self advocating makes patients more powerful and successful in healthcare. It’s why Patients Rising has the Patients Rising University . But knowing when you can’t do it alone and need help is also important – we can’t be everything all the time – which is why we have Patients Rising Concierge.

Use these services. Lean on them. We have made them for you based on what you’ve told us about your needs.