Until one day, while gardening, she felt pain in her chest, radiating down her right arm. Even then — while she was having a heart attack — the paramedics told her she couldn’t be right.

“When the paramedics arrived, I told them about my high cholesterol and that I was concerned about a heart attack,” she says. “But they said there was no way it could be a heart attack because I was a young woman.”

It’s a frequent problem facing patients, especially women. Because a patient doesn’t fit with the stereotype for their disease or chronic condition, symptoms are ignored, warning signs go unnoticed, and the patient fails to get the treatment that could save their life.

In an effort to empower more women to speak up and demand the right medical care, we’re sharing Katherine’s story as part of a special feature on high cholesterol in this month’s WOMEN magazine.

Katherine received right diagnosis — only after her heart attack

Here’s an excerpt of her story, featured in this month’s WOMEN magazine.

“Katherine had suffered a heart attack. She learned that the main artery to her heart was completely blocked, and she underwent surgery to insert a stent, a small tube that could support the inner wall of the artery. In the ensuing months, she lived in fear of a second heart attack that would end her life. Finally, at the age of 41, she was referred to a lipidologist, who diagnosed her with familial hypercholesterolemia (FH), an inherited disorder that leads to aggressive and premature cardiovascular disease.”

“The lipidologist was the one who explained what FH was and told me I needed to have my two-year-old daughter tested because she had a 50 percent chance of inheriting the condition,” says Katherine, who founded the FH Foundation in 2011 to raise awareness, promote research, and support people with FH.

Although exercise and a healthy diet can decrease LDL to target levels in many people, this is not the case for the estimated 1 million people in the United States who have FH. Most cholesterol circulating in the body is produced by the liver and used to make natural hormones, steroids, and cell membranes, but people with FH are unable to break down the natural supply of cholesterol that is not used by the body. Starting in the womb, they are exposed to high levels of LDL and are at risk of having a heart attack or stroke decades earlier than most people. 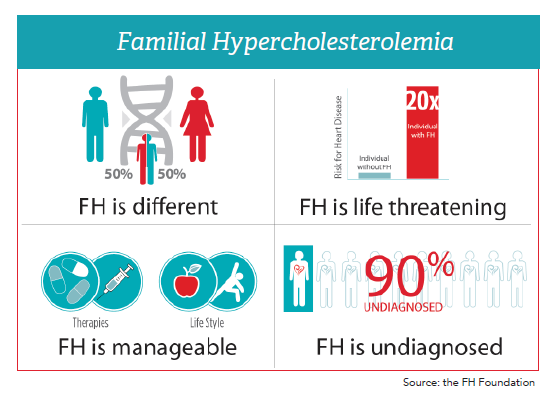 Katherine isn’t alone. Upwards of 90 percent of patients with Familial Hypercholesterolemia are undiagnosed, according to research published in the European Heart Journal.

Familial Hypercholesterolemia, known simply as FH, is an inherited disorder that leads to aggressive and premature cardiovascular disease. An estimated 1.3 million American patients suffer from FH — with about 1 in 250 people worldwide. Patients can suffer from problems like heart attacks, strokes, and even narrowing of our heart valves

“For individuals with FH, although diet and lifestyle are important, they are not the cause of high LDL,” notes the FH Foundation, a patient-centered nonprofit organization dedicated to education, advocacy, and research of the disease. In FH patients, genetic mutations make the liver incapable of metabolizing (or removing) excess LDL. The result is very high LDL levels which can lead to premature cardiovascular disease (CVD).

One study found that there’s a “more than 50% risk of fatal or non-fatal coronary heart disease by age 50 years in men and at least 30% in women aged 60 years.”

For decades, the primary treatment for FH has been statins. That’s changed with the arrival of a new class of treatments, known as PCSK9 inhibitors.

PCSK9 inhibitors, according to MedScape.com, lower lipid levels through monthly or bimonthly injections. For Katherine this new type of drug cut her LDL level from 170 to 60 mg/dL.

Dr. Scott Wright, Professor of Medicine at the Mayo Clinic College of Medicine, says that these treatment innovations have big advantages over statins.

“They promote the modulation of the receptor that clears cholesterol—if you give the drug, you prolong the receptor and clear more cholesterol,” he explains. “You don’t block synthesis, you block clearance.”

PCSK9 inhibitors remove the bad cholesterol that contributes “to plaque deposits in blood vessels, which can lead to heart attacks and strokes.”

Patient Rights: What to Do If You’re Denied Coverage for PCSK9 inhibitors

Despite the clear value of this new treatment, many insurance companies and health care providers refuse to cover this treatment.

What can patients and their families do when insurance companies deny coverage of PCSK9 inhibitors?

With the help of Matthew Stryker, a pharmacist who works in the Albany Medical Center, health advocate Seth D. Ginsberg, the co-founder of CreakyJoints, has identified several ways for patients to fight back. To start, Ginsberg recommends you document everything.

“For example, if you’re intolerant of a statin, make sure your doctor indicates which statin, the dosage, how often it was taken and the specific side effects or reason you can’t take it anymore,” Ginsberg advises. “Also make sure your doctor has a detailed family history of any type of heart disease, as this will make a stronger case for your appeal. Once an appeal is made, touch base with your doctor’s office periodically to check on the status, understanding that they’re working on your behalf – so while it’s important to be persistent, also be polite.”

After documenting everything, call you health care provider or insurance company and, if necessary, appeal their denial. Don’t be intimidated by the process. Just check out our helpful guide: Patient Rights: What to do when your health insurance says “no.”

“Advocating can be scary if you’ve never done it,” Ginsberg reminds patients, “but getting involved is crucial, because if patients don’t, nobody else will.”

If all else fails, contact us here at Patients Rising.