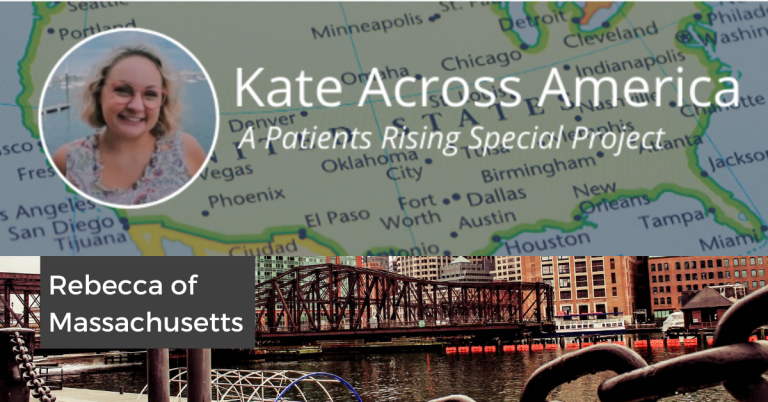 Kate “Across America” Pecora interviewed Rebecca Wood from Virginia (though of late from Massachusettes). Rebecca’s daughter, Charlie, was born dramatically underweight. The healthcare costs the family face, have led Rebecca to advocate for Medicare for all. Once you read her story, you’ll see why.

If you’ve been keeping up with recent activism around the movement for a single-payer system, you may be acquainted with Rebecca and her lovable daughter, Charlie. An established activist for Medicare for all, immigrant rights, and women’s rights, Rebecca isn’t afraid of a fight.

But this was evident long before her call to social justice.

In 2012, Rebecca became pregnant. At the time, she was living in northern Virginia, preparing to attend graduate school to study global health. She kept herself busy, planning to expand her little family and all pondering the joys her child would bring.

It was the 26th week of gestation when Rebecca began experiencing symptoms of preeclampsia. After a few days of deliberations between her obstetrician, perinatal specialist, and others, she was told that she must immediately deliver the baby. Ten hours and an emergency C-section later, Charlie was born. Weighing in at just over 1 pound, Charlie was the size of Rebecca’s hand. 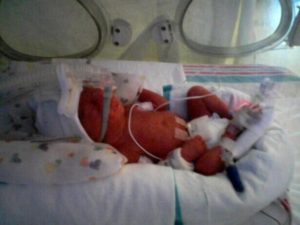 In the chaos surrounding them, there was little time to ask questions, to truly feel heard. The sense of urgency became abundantly clear – there was a very real chance that Charlie was not going to survive.

“The only thing I could do for her was be there. I wasn’t going to let her die alone”.

For 89 days, Rebecca would care for her newborn from the bedside of the NICU, empowered that her daughter had lived another day, but also surrounded by constant loneliness, seeing parents take home their healthy babies. All other worries seemed trivial, “When you have a baby,” she told me, “it’s supposed to be so happy, so exciting, but I was so overcome with grief”.

Months went by and finally Rebecca could take her baby home. Just when she thought the most difficult experience of her life to finally be over, she quickly realized that Charlie’s birth was only the first battle in a much larger war. She was flooded with hospital expenses, co-pays, deductibles to be met, and not to mention the struggle to access early intervention programs in Northern Virginia. It was entirely overwhelming. As if the emotional drain that Rebecca and her family had gone through was not enough, the financial hardship began to pile up to the point where Rebecca began making tough choices – putting her daughter’s health before her own.

“No matter what we could or couldn’t do, we were going to give her life purpose and meaning”.

As Charlie began to miss major milestones, Rebecca sought the opinion of her pediatrician, ultimately leading to many diagnoses, including Cerebral Palsy, Failure to Thrive, and various sensory and feeding disorders. Charlie was losing weight, unable to eat or keep down foods, and had serious impairments in speech. Even with a private health insurance plan, Charlie’s needs were financially unsustainable, prompting an application for a Medicaid waiver to cover Charlie’s complex care.

Rebecca was committed to seeking the best care for Charlie. That meant enrolling her in the programs recommended by her outstanding coordinated-care team at UVA Health. These included physical therapy, occupational, speech and feeding therapy, and group programs with other children. While she saw progress in Charlie’s development, she also saw the flood of bills for these programs.

When payments were due for Charlie’s therapy, Rebecca began experiencing dental pain. Hoping to do right for her daughter, Rebecca decided to hold off on seeing a dentist, knowing that she was would be unable to pay both medical bills. The decision nearly cost Rebecca everything. She developed widespread infection, resulting in all of her teeth being pulled and her jaw scraped away.

This particular experience, as she explains, could happen to anyone. ‘When anticipating healthcare costs that you don’t have the resources to pay, your health is going to suffer’. Even today, years later, Rebecca has challenging dental maintenance, citing this as an issue of quality of life, an entirely preventable issue.

GOOD NEWS AND A CAUSE TO FIGHT FOR

Despite the odds, Charlie is now 7 years old. Through the constant chaos, Rebecca has managed to find moments of 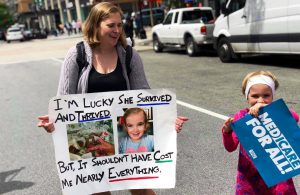 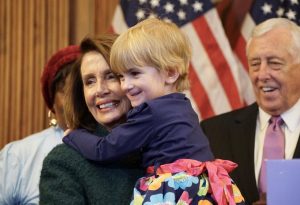 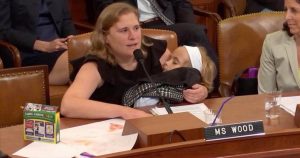 joy to share with her daughter. They are often seen on Capitol Hill sharing moments with Speaker Pelosi, championing Medicare for All. Because of various therapies, including music therapy, and a little help from her favorite band, Dispatch, Charlie has found her voice (quite literally).

Charlie is becoming acquainted with first grade at her new home in the Boston area, and Rebecca has recently taken a position with MassCare, a local non-profit organization tasked with advancing single-payer healthcare in the Commonwealth.

Kate Pecora is a graduate of the University of Massachusetts Amherst where she studied Healthcare Policy and Political Science. She is an advocate for rare diseases, primarily in the neuromuscular space. Kate has Spinal Muscular Atrophy Type III. She is virtually traveling across the country in search of the most compelling stories of patient access, affordability, and quality. Ultimately this will become a book that will educate

From the Editor: Here are other articles from Patients Rising addressing healthcare costs.

DIABETES: COST, AGENCY, AND A NEED FOR CHANGE by Franee

MEDICAL BILLS: HOW I REDUCED MY MEDICAL COSTS AND AVOIDED GOING INTO DEBT by Jim Sliney Jr.