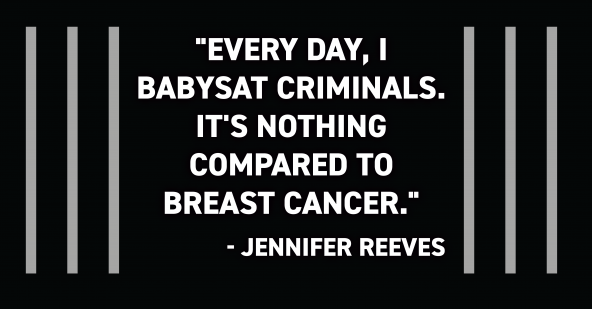 I thought being a probation officer was tough. Then, I was diagnosed with Triple Negative Breast Cancer. 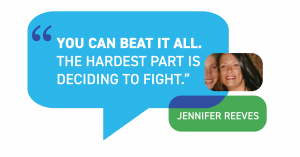 I thought being a probation officer was tough.

Probation officers babysit criminals that did not draw the “Go Directly to Jail Card.” It commonly took me to the most crime-ridden and not-so-nice areas of Boston. Not a problem. I was focused, disciplined, and tough. Or, so I thought.

Then, I found a lump. The lump turned out to be something. Something more than “just a cyst.”

I was diagnosed with Triple Negative Breast Cancer. One of the worst types of breast cancer. The kind that few women survive.  After my doctor said those words, everything else became background noise. All I could hear was the deafening silence of my fear.

That first night after my diagnosis, I was emotionally drained and physically exhausted. And my fight to stay alive had only just begun.

At the time of my diagnosis, I was in between jobs as a probation officer — after all, I was on to bigger and better things, and that included a new job I had not started yet. I had no insurance. What was I going to do? How was I going to beat the worst type of breast cancer? How would I find the right doctors and the right treatment? And how was I going to pay for it?

I could stare down criminals, but I couldn’t look in the mirror without being totally paralyzed by my fears. I distinctly remember knowing that the Jennifer I was before cancer was gone. The carefree probation officer was no longer carefree. The young woman with dreams now had one dream: to stay alive.

Though my job required me to always have my guard up, my life at that time was much more carefree. I was young. I worked in an amazing city and as most 27-year old single women, I knew I was on my way to bigger and better things. A better job. The man of my dreams. Complete with kids and white picket fence. It seemed simple enough, right?

This picture of me was taken at a friend’s wedding. I remember it well becauise it was the first time felt the lump.

It’s one of my last carefree moments. As a BRCA+ patient 14 years cancer free, the dream to stay alive still dominates my psyche and there is not a damn thing I can do about it. 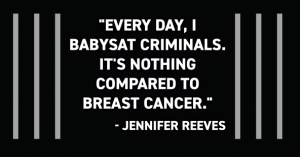 I know each patient’s journey is unique. Some patients I speak with struggle to overcome a barrier to access, such as getting a second opinion, high copays or step therapy. Others may get the right treatment only to have an insurance company pull a bait and switch when it comes time for the bill. In my case, I needed a charitable assistance program that would get me the right treatments without any means to pay for it.

The challenges are all different and require different sets of tactics for overcoming them. Yet, every patient starts by overcoming the fear. By turning our fear into action. By telling ourselves that we are tough enough to fight this.

I’m grateful to the top-rated hospital that provided me with the right treatment through its “free care” program. I’m alive today because I had access to the right treatment — right when I needed it to save my life. I’m alive today because of the brilliant doctors, caring nurses and innovative medications that saved my life. But, I also know that it started with my decision to fight.

And boy, will you fight. You’ll fight health care bureaucracies, insurance companies, routine delays and endless denials — all of which drain patients of precious energy that should be spent fighting their disease, condition, or illness. Then, you’ll need to fight through bilateral mastectomies, dozens of rounds of chemotherapy and surgeries. And for many women, the cancer returns and they fight all over again. And again. And again.

And it all starts with your decision to fight a battle you never signed up for.