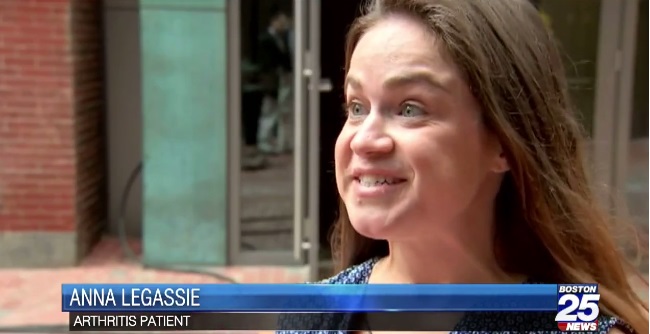 With step therapy, insurance companies force patients to fail first with the wrong treatment. This policy can have devastating consequences for patients, all the while driving up health care costs.

House Bill 492 and Senate Bill 551 would establish guidelines for medical providers to override step therapy, when deemed medically necessary. Insurance companies would be required to be transparent and expeditious with their appeals process.

Check out Anna’s story and watch the full interview at Fox25Boston.com.

Massachusetts legislators are again considering a bill that would make it easier for patients in the Commonwealth to get the best treatment available quicker.

Sen. Barbara L’Italien (D – Lowell) and Rep. Jennifer Benson (D – Lunenburg) have filed separate bills in the house and senate proposing a restriction on the ability of insurance companies to require step therapy. Both bills cite the need to reduce the cost of healthcare.

Some patients and doctors say the step therapy process can be detrimental to a person’s health, in addition to possibly being a painful wait.

“They wanted me to go take drugs that I had tried before… that had failed. One of them I had a very serious adverse reaction to,” said Anna Legassie, who has arthritis.

When her doctor prescribed her a new medication to help treat her arthritis, her insurance said it wouldn’t be covered until she tried two less expensive medications. But she had already tried both of them.

Another issue with step therapy is that it can get expensive to try more medicine in search for what works.

“Doctors should be able to prescribe the drug they feel is best, safest and most effective for their patients with no interruptions from insurance companies,” said Legassie.

A similar bill, H.791, was introduced in January 2015 by Rep. Benson. After clearing the Health Care Financing and Financial Services committees, the house approved the measure in April of 2016. It was then referred to the House Ways and Means committee, where it died.

You can read more about the senate bill here and the house bill here.