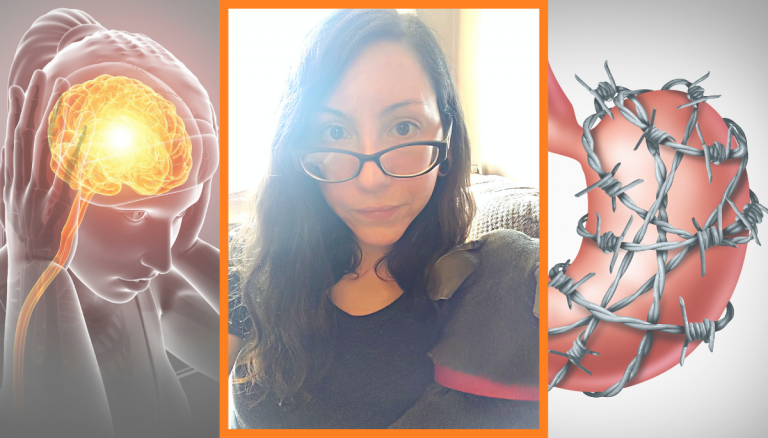 This article is co-authored by Surabhi Dangi-Garimella and Jim Sliney Jr.

Gastrointestinal manifestations in patients with migraine have been known for some time now and can complicate migraine treatment. These symptoms are not well-integrated into the treatment plan for migraine patients. A significant reason for migraine treatment failure is inadequate dosage(1). Nausea is a marker of severe debilitating migraine, and effective management of nausea has been recommended to reduce headaches in those with episodic migraine.

Most migraine therapies are oral, including the triptans. A study among over 3700 migraine patients who were taking oral triptans identified nausea as a significant predictor of treatment failure. This could be because nausea can cause patients to delay or avoid taking their oral medication, while vomiting can result in the medicine being expelled. Consequently, therapeutic efficacy of the triptans is compromised. Studies have confirmed this patient behavior: 40% of migraine patients on oral medications reported delaying or avoiding use of their oral prescriptions because of migraine-associated nausea/vomiting. However, when triptans are administered with gastrokinetic drugs, their efficacy improves.

Gastroparesis or gastric stasis, characterized by delayed gastric emptying, has also been associated with migraine headaches. Clinically, gastroparesis is characterized by nausea, vomiting, bloating, dysmotility and weight loss. Using gastric scintigraphy, researchers showed that migraine patients suffer from gastric stasis during (ictal) and in-between (interictal) an acute migraine attack, and that gastric emptying time is much longer among migraine patients even outside of a migraine attack. The slow gastric emptying can significantly affect oral drug absorption, in turn affecting treatment efficacy and, consequently, patient relief.

Migraine and Gastroparesis – a vicious cycle?

A vicious cycle can ensue between a migraine attack and gastroparesis—both conditions are the consequence of a dysfunctional autonomic nervous system. There remains some controversy around whether gastroparesis is a constant issue for migraine patients or whether it is only associated with the ictal period. Several studies have shown that the phenomenon is observed in the interictal period as well(2,3,4). Nonetheless, gastroparesis creates significant discomfort for migraine patients, in addition to interfering with their migraine treatment.

While the oral route is convenient and familiar for drug administration, patients with gastroparesis issues need alternate options, such as injection or nasal sprays. The patient’s clinical team needs to understand these issues, assess the patients for signs of gastroparesis, and develop an individualized treatment plan that can control the migraine headaches.

Considering this association between migraine and gastroparesis, if a patient stops their migraine medication, the untreated migraine and associated gastroparesis would completely disrupt their daily life. The following case study reflects just that. In Taylor’s case, the ceasing of migraine treatments predated the first symptoms of gastroparesis by about three years. But it can’t be ruled out that mild, underlying, undiagnosed malabsorption or dysmotility had some role to play in the ineffectiveness of migraine treatments.

Taylor grew up in Virginia Beach, VA – “the big city”- but now lives in rural WV. From as early as she can remember, she always had very flexible joints, and these have sometimes been accompanied by aches and pains. When she was 13 years old she began seeing a therapist for depression. “I’ve always been very sensitive to the energy of others”, Taylor says. She continued with therapy for many years and learned a lot about herself, including how to cope with depression and anxiety.

Years later, as a 19-year old senior in High School, she began having nagging headaches. After about a year, she decided to see a doctor for the headaches and was diagnosed with migraine.

Her doctor tried to get her referred to a neurologist, but finding someone who specialized in migraine care took almost a year. By the time of her neurologist’s appointment, Taylor had already done a lot of research and began to get involved in patient support groups on Facebook. She asked to have an MRI and CT scan to diagnose what the causes of her migraine might be, but her neurologist was hesitant, asserting that it wouldn’t make a difference. But Taylor persisted.

Throw it at the wall and see what sticks

When she convinced the neurologist to do the scans, according to Taylor, “it felt very much like he was just trying to placate me”. She learned from the scans that she had a facet joint issue in her C2 and some herniated discs in her neck but nothing conclusive about the cause of her migraine. Meanwhile, she was put on various known migraine therapies and medications, none of which helped her condition. In fact, several medications that Taylor tried resulted in adverse  effects, including one which blurred her vision. Her doctor asked Taylor to immediately stop that medication because it was a rare side effect that could increase her risk for blindness.

Once all of the standard options were tried, and failed, her neurologist referred to a pain management specialist. The plan there was to get her started on opioids, but Taylor refused. “I know a lot of people with chronic pain rely on opioids, so I wouldn’t say anything bad about them, but I knew it just wasn’t for me.” It was at that point, in 2014, with her neurologist out of ideas, that Taylor quit all migraine treatments.

A Diagnosis of gastroparesis

In 2017, three years after stopping all neurologist-prescribed treatments, Taylor was diagnosed with gastroparesis. It began when she presented with unexplained weight loss of about 30 pounds, abdominal pain, nausea and some vomiting. She went to the ER where the doctor thought she had ulcers. Taylor had ulcers in the past and was convinced this was something different. She was referred to a gastroenterologist who specialized in motility disorders, where she was, after a gastric emptying study, diagnosed with gastroparesis. This greatly limited what food Taylor could eat and how much fluid she could drink, and negatively impacted her overall health.

The lack of migraine treatments

In 2018, Taylor tried chiropractic as a possible treatment for migraine, as well as for joint pain and tendonitis which had been present since childhood. She found that chiropractic treatment helped in the short term with her range of motion and flexibility, but it was also causing more migraine flare ups. In time, she stopped that, too.

When asked about her migraine triggers, Taylor expressed some frustration. Over time she figured out some things that were better or worse for her migraine, but she expressed, “when you have chronic daily migraine, it’s really hard to tell what is or isn’t a trigger.” Over time certain things were obvious, like strong smells, loud noises, certain movements, etc. But with her daily migraine, and no testing that ever pin-pointed its cause, she gave up the quest for causes and instead focused on what gave her relief.

Taylor had very little work history. When the combination of arthritic joint pain, tendonitis, migraine, and gastroparesis left her disabled, she applied for and received Supplemental Security Income (SSI). Despite all its restrictions, SSI allowed Taylor to stay on her mother’s health insurance beyond 26 years of age (the age limit set by the Affordable Care Act). She remains on it to this day. But having health insurance is not the same thing as having access to quality care, and affordability is still a big issue for Taylor.

Taylor explained that if she had the financial resources, she would probably pursue additional testing to find treatments for her gastroparesis, migraine, and tendonitis. When she received COVID-19 stimulus money in 2020, it was put towards precisely that. She got an endoscopy done, but the findings were inconclusive.

For now, Taylor is doing what she can to live her best life. “I try to eat well, but my diet is limited to rice, potatoes, and yogurt”. She ate a more balanced diet after stopping migraine treatments, but gastroparesis forced her to change. She uses stress management techniques to reduce the intensity of her daily migraine, art to express herself, and some regular, but cautious exercise.

The trap of chronic illness

Taylor wants to be well, but finances, her distance from expert providers, and the limitations of her diseases are keeping her stuck in place. The nagging wonder is whether taking a risk on a treatment for one of her conditions will have positive effects on her other conditions. Until then, Taylor, her husband and her dog will go on modest walks in the countryside, and Taylor will keep painting.

As the Director of Patient Outreach at Patients Rising, Jim works very closely with the people to help them tell their stories. Jim is a Columbia University trained writing consultant and has worked closely with writers of all levels of skill to help them find and refine their voices. He is a writer, editor, author and certified medical assistant with over 20 years of experience in healthcare. Jim has spent over two decades in clinical care and research at some of New York’s biggest health institutions doing hands-on patient care, education and advocacy for rare disease patients. He has worked with several non-profit patient support organizations doing outreach, advocacy and creating educational content. Twitter Linkedin