Ken L., a scientist and passionate painter in New York City underwent treatment for prostate cancer. He is in remission now but there was a moment where the decision to get a second opinion may have saved his life.

WHAT IS THE PROSTATE? 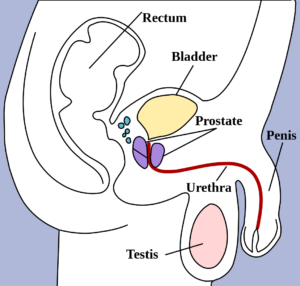 The Prostate Cancer Foundation describes the prostate as “a small, squishy gland about the size of a ping-pong ball.” The prostate plays an important role in reproduction, because it supplies the seminal fluid, which mixes with sperm to create semen. The prostate gland is located between the base of the penis and the rectum.

WHAT GOES WRONG WITH THE PROSTATE?

The prostate gland continues to grow gradually as men age. Here are the three primary problems that people experience with their prostate all of which relate to its enlargement.

HOW TO TEST THE PROSTATE

Tests to detect problems with the prostate include:

“My first and only symptom was frequent urination, particularly at night. My doctor monitored me for 5 years before I was diagnosed with prostate cancer. I was examined at every visit. Urologists are very keen on doing digital exams! But they only showed an enlarged prostate, not necessarily cancer. I often wonder if I should have had a biopsy performed sooner – I think he should have ordered a biopsy when my PSA got to be about 10.”

Having some Prostate Specific Antigens in the body is normal. If the PSA is in the normal range, it is common for doctors to take a “watchful waiting” approach where they assess the risk of cancer over time. But the definition of “normal” has been changing.

Until 2008, medical professionals encouraged yearly PSA after 50 years old. Technically, a PSA value between 0 – 4.0 ng/mL is “normal” but higher numbers do not necessarily indicate prostate cancer because other factors like infection or inflammation can cause the number to go higher. More recently, “normal” varies by age and race. The value of watchful waiting is important because for many years prostate cancer was treated too aggressively which led to anxiety and other reductions in quality of life not to mention dangerous medical procedures.

Ken was seeing a urologist that his internist had referred him to. That urologist “watched” but may have done too much “waiting”. It wasn’t until Ken went to a different urologist (“because my first doctor stopped accepting Medicare”) that he was quickly biopsied and officially diagnosed with prostate cancer. 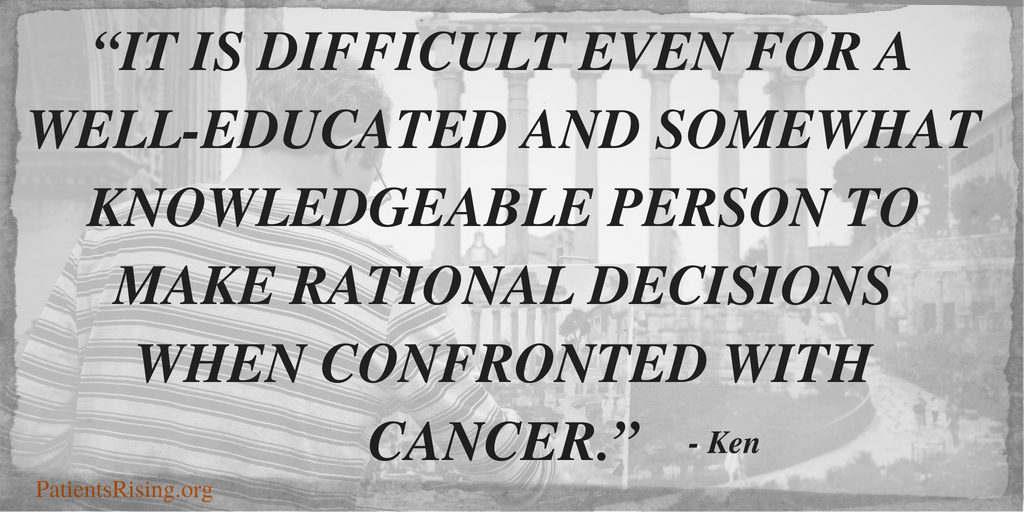 A specialist determines what treatments are appropriate and when based on what they know about the cancer.

Ken says, “I initially saw a urologist and radiologist at one hospital. I thought they explained the possible treatments and side effects very well. But looking back, I think I should have looked into other therapies, like lower-dose-radiation, more carefully.”

Being informed by your doctor is both your right and their responsibility. But responsibility also falls on the patient to get all the information possible to make an informed decision. Ken is a scientist and knows much more than the average person about how cells work. However, that didn’t make ‘being informed’ any easier because, as Ken points out, “It is difficult even for a well-educated and somewhat knowledgeable person to make rational decisions when confronted with cancer.”

That’s because a cancer diagnosis is unlike any other kind of diagnosis. Knowledge does not protect you from the mortal shock of cancer. In that state of shock, you are still expected to make huge decisions relatively quickly. This may be the best reason to take the time and get more than one professional perspective on your condition.

THE VALUE OF A SECOND OPINION

“I consulted a urological oncologist. He initially suggested to continue monitoring but after he got a second opinion of the pathology slides (biopsy results) he recommended immediate treatment.”

There are other treatments options as well that Ken and his doctor did not opt for:

Ken is now considered to be “in remission”. He will be considered “cured” once he has been in remission for 4-5 years. Not only is he still painting, he and his wife travel to painting classes through the U.S. and Europe. He is optimistic, and with good reason.

More technologies and treatments are available than ever before to treat prostate cancer. Understanding what his options are and staying vigilant, yet patient, reduces the fear of recurrence and gives him the best chance of success going forward.