California voters to decide whether to impose price controls

In just a few weeks, California voters will decide whether to become the first state in the nation to impose price controls on treatments and medications.

Proposition 61, known as the Drug Price Relief Act, would prohibit the state from paying more for a prescription drug than the lowest price paid by the U.S. Department of Veterans Affairs. Well, there’s some fine print.

The LA Times notes that 75% of Medi-Cal recipients — those who are on the managed care program — aren’t “covered by this proposed law.” That’s a concern for some patient advocacy groups.

“All of Medi-Cal managed care is carved out of the initiative, which is where the overwhelming majority of drug purchasing in Medi-Cal occurs,” explains Project Inform, which advocates for patients living with HIV and hepatitis C. “Even if the initiative were to result in cost savings to the state, it is unclear whether or not lower prices would be realized for consumers.”

In addition to overpromising the impact, some are worried that the measure could deal a long-term setback to innovation.

“It will only lead to less innovation and a diminished supply of drugs,” the Orange County Register wrote earlier this year. “In order to reduce the cost of drugs without the harmful economic side effects, we should be eliminating the regulations that unnecessarily raise the cost of producing medicines, retard drug development and cause people to languish and die while awaiting the approval of the FDA bureaucracy.”

If the proponents of Prop. 61 hoped to gain an advantage by linking the price control measure to the Veterans Administration, it’s already backfired.

“Proposition 61 is a deeply flawed measure that would hurt our nation’s veterans by increasing drug costs to the U.S. Department of Veterans Affairs (VA) and, consequently, increasing the price veterans pay for prescription drugs. And the increase in costs to veterans would be significant,” writes Dale Smith, the commander of the Veterans of Foreign Wars, Department of California. “We are all concerned about health care costs but Proposition 61 isn’t the solution.”

An analysis by the Veterans Administration predicts a $3.8 billion increase in the cost to obtain treatments for VA patients, if the ballot measure passes. 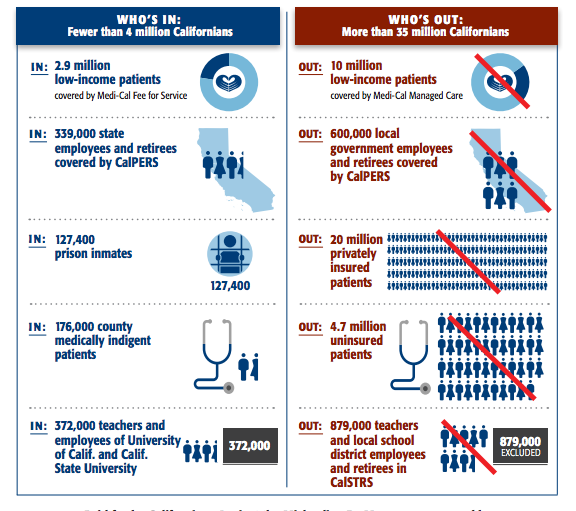 Higher costs for veterans could come without any savings for civilian patients.

The California Legislative Analyst’s Office, an independent panel of experts that provides impartial analyses of proposed legislation, is warning that the measure might not save patients one penny.

“It is ‘highly uncertain’ how much money the state of California would save if a ballot measure to cap drug prices passes in November — and it might not save money at all,” California Healthline notes in a summary of the LAO report. “The financial impact on the state is unclear.”

The Legislative Analyst’s Office reached its conclusion on the futility of the Drug Price Relief Act for two reasons.

Even supporters of drug price controls are warning that Prop. 61 is a flawed measure that could harm patients’ ability to access medications.

The Sacramento Bee editorial board says that problem of drug prices is “too complex to fix with Prop. 61.”

“The initiative comes with too many uncertainties and not enough guarantees that things won’t get worse,” the newspaper editorializes. “We’re loath to admit the industry is right when it says this is an all-too-simplistic solution to a complicated issue.”

The Bee adds, “Even more troubling, Medi-Cal might have to ignore the initiative altogether and pay whatever the drug companies are asking, just to abide by federal law to provide members with access to crucial medication.”

As a result, the newspaper concludes that the only guarantee with Prop. 61: years of costly litigation. “The only thing we can predict with any certainty is that if Proposition 61 passes, it will be tied up in court for years to come.”