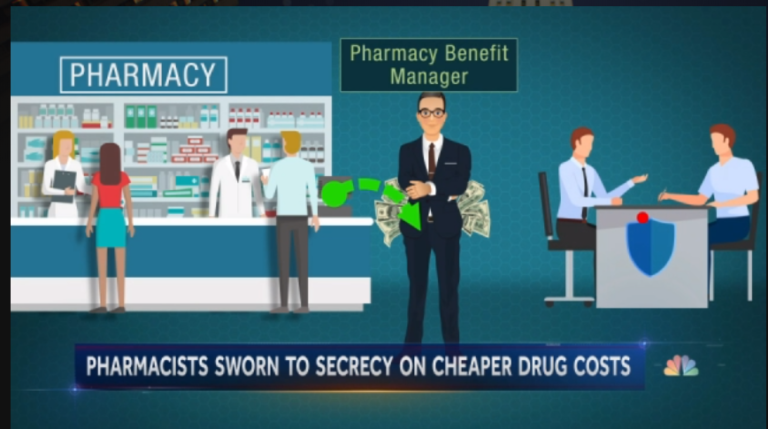 If you found out that there was an unregulated part of the healthcare system that was increasing the price of your prescription so that they can maximize their profits would that make you angry?

If so, wait until you hear this: often you’d pay less if you didn’t go through insurance at all!

That’s because of something called Pharmacy Benefit Managers (PBMs). You may not have heard about them and that’s exactly how they’d like to keep it.

They dictate how much you pay for your prescriptions, but they’ve gone unregulated and have become increasingly profitable and powerful. The three largest PBMs control 70% of the market.

How does it work? PBMs negotiate steep discounts from drug manufacturers—anywhere between 35%-55% off the cost of the drug. But they don’t pass those savings along to patients. They tell insurers and pharmacists how much to charge for the medicine. And every step of the way they hold onto part of the money for themselves.

One of the worst parts is that pharmacists aren’t allowed to tell you that it would be cheaper to pay without using your insurance because PBMs have put them under a gag order! That’s right—you, the patient, are kept in the dark.

Now, PBMs are coming under increased scrutiny. Some states have taken action and passed laws to prohibit those gag orders. Other states have bills pending that would do the same.

If you, or someone you know, is struggling to pay for medications, it’s important to understand the reason why.

Patients with chronic diseases already suffer enough. You shouldn’t face the added stress of paying more for your medicine than you need to. Your insurer doesn’t pay full price for medications, so why should you? It’s time PBMs put patients over profits. Please spread the word. Watch this to learn more: