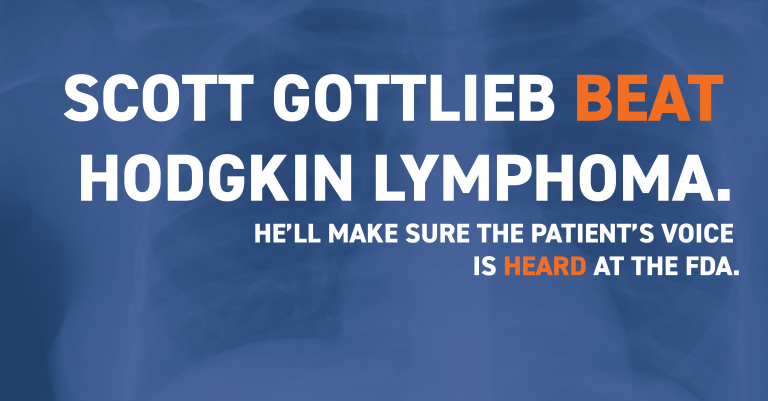 “Scott Gottlieb is an outstanding choice to lead the FDA, and his appointment represents a landmark opportunity for true and overdue reform,” said Jonathan Wilcox, co-founder and policy director of Patients Rising. “As a physician, scholar and also a patient, Dr. Gottlieb has the perspective and ideas to bring great, lasting and transformative change. Patients stand to immeasurably benefit from his leadership, and we are proud to support his nomination and urge his speedy confirmation.”

Gottlieb’s background includes experience in nearly every facet of health care. He’s a physician, who trained at Mount Sinai School of Medicine and taught at New York University School of Medicine. He’s served two stints at the FDA, including time as a former deputy commissioner. He’s also identified ways to improve the agency and, according to Bloomberg, “talked extensively about how to lower the cost of prescription drugs.”

“Throughout his career, including his time at the agency, Scott has shown that he has the skills necessary to continue to lead the FDA to be patient-centered and science-focused,” said Ellen Sigal, founder and chair of Friends of Cancer Research.

His nomination is being heralded by a diverse group of health care stakeholders, but the strongest support is coming from fellow patients.

“I know of Scott’s calm courage after his cancer diagnosis, his devotion to his family and his dedication to the practice of medicine,” writes Dr. Bob Goldberg, co-founder and vice president of the Center for Medicine in the Public Interest. “He knows that patients and their families have as much a right to weigh in on FDA decisions as any so-called expert.”

Brian Kennedy, executive director of the Alliance for Patient Access, believes that patients will benefit from Gottlieb’s leadership at the FDA.

“Patients and health care providers alike would do well to have Dr. Scott Gottlieb at the helm of the Food and Drug Administration,” he said. “Dr. Gottlieb’s experiences as a health care provider shape his unique perspective on the importance of safe, effective medications in the United States. Moreover, he has established a reputation for valuing patients’ access to these medications.”

Scott Gottlieb beat Hodgkin lymphoma. He’ll make sure the patient’s voice is heard at the FDA.

“As a physician and cancer survivor, Dr. Gottlieb understands the human toll cancer takes on individuals and families, during both treatment and long-term survivorship,” said Shelley Fuld Nasso, CEO of the National Coalition for Cancer Survivorship. “He is open to a wide range of perspectives, including those of the patients whose lives depend on a strong FDA.”

During his time as the FDA’s Deputy Commissioner for Medical and Scientific Affairs, Gottlieb continually reminded his colleagues that the FDA’s main directive was to serve patients. “We need to work together to make sure that we use these resources to maximum advantage for patients,” he said in a 2006 speech that included more than 50 references to patients.

No wonder he’s already been dubbed, “The Patient’s FDA Commissioner.” 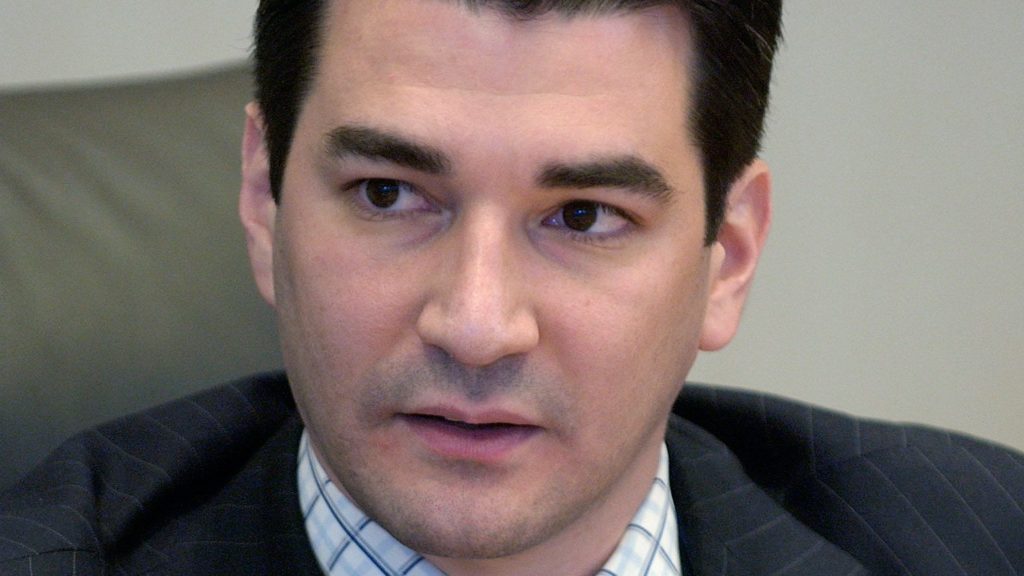 Scott Gottlieb is expected to get to work on lowering prescription drug prices for patients.

Prior to his nomination, Gottlieb identified health care costs as a top concern and offered policy recommendations for achieving greater savings for patients. On prescription drug prices, Gottlieb’s proposals, according to Vox, would encourage “cheaper generic products, which would help bring down drug costs.”

In addition to encouraging greater competition and quicker access to generic drugs, Gottlieb is keenly aware of the “byzantine model for selling drugs” that sends money meant for patients to corporate middlemen.

“The convoluted arrangement by which drugs are priced and sold arose accidentally as a result of litigation,” he explains. “But now that this inept system is firmly entrenched, bringing rationality to the selling model is going to disrupt inter-reliant business practices.”

Scott Gottlieb is passionate about encouraging greater innovation in health care, and guaranteeing that patients have access to new treatments.

“The plain truth is that many of the most dramatic scientific advances that we’ve recently made in the labs haven’t yet transformed medical treatments,” he said. “We’re not seeing these new medicines and these new approaches to treatment being developed fast enough for the millions of patients suffering today from cancers that may be more treatable or even cured in just a few more years.”

For decades, he’s called for a streamlined FDA approval process to get patients faster access to life-saving treatments. He wants to see a “new vision for how a regulatory agency can use advances in science to help accelerate medical advances.” That includes embracing precision medicine and new technologies that allow us to identify the right treatment for each individual patient.

He’ll also look to policies that are working in other countries.

“Europeans are now approving novel drugs an average of three months more rapidly than we do,” he warned in a 2010 Wall Street Journal opinion piece. “What’s more, the clinical trial requirements that the FDA is imposing on cancer drugs with accelerated approval are now as burdensome as the requirements imposed on regular drugs. So, practically speaking, having “accelerated approval” doesn’t mean anything.

Patients living with rare diseases can expect Scott Gottlieb to be a fierce advocate for advancing approvals for treatments for rare diseases.

“Dr. Gottlieb’s nomination is a great day for science, for medical innovation and above all, for patients and families living with life threatening and disabling conditions,” writes John Crowley, who is on a quest to find a cure for his two children diagnosed with Pompe disease, a severe and often fatal neuromuscular disorder. “Too many new medicines today for too many diseases though, especially rare diseases, are not reaching patients as fast as necessary.”

Before a treatment receives FDA approval, it must go through years of reviews and clinical trials to ensure its safety and efficacy. Those trials rely on medical standards that have thresholds for statistical significance. This system works well for patients with common diseases, but what about rare diseases?

In 2012, Gottlieb wrote about the regulatory obstacles for patients living with Hunter-syndrome. The rare disease affects fewer than 2,000 patients worldwide, which makes it difficult to find enough patients for a traditional trial.

“In order to approve the drug for use, the FDA required the trial to involve 96 patients with Hunter syndrome — some 20% of all Americans afflicted with the disease,” he wrote in a piece for National Affairs. Moreover, for the first time in such a study of enzyme-replacement therapy, the FDA also insisted that patients be randomly assigned to receive either the experimental drug or an inert placebo.” 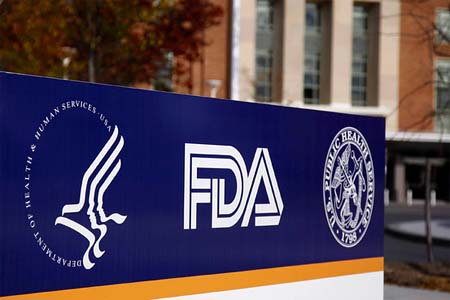 “Our efforts to improve the process for getting promising new medicines to cancer patients who need better treatments starts with the process for reviewing new drugs to make sure they are safe and effective,” he said in a 2006 speech.

Dr. Gottlieb understands that FDA approval is a delicate balancing act. Patients, especially those living with incurable diseases, need the fastest access to new innovation. Those treatments must always be safe. In a 2014 piece for Forbes, Dr. Gottlieb praised the FDA for requiring additional independent testing for “a copy formulation of a complex, intravenous medicine used to replenish kidney-dialysis patients’ stores of iron.”

“Additional evidence was needed because this type of drug represents a new chapter in FDA drug approvals,” he wrote. “These challenges illustrate a need to reconsider how FDA approves copy versions of complex drugs. Perhaps different approval standards should be used.”

Under Gottlieb’s leadership, the FDA is likely to focus on safety that is driven by sound medical data. It could be a new and better day for patients.

Scott Gottlieb is an outstanding choice to lead the FDA, and his appointment represents a landmark opportunity for true and overdue reform.

Editorial | Scott Gottlieb, Trump pick for FDA, is on the side of the little guy https://t.co/oYZAiMM5nq pic.twitter.com/HojPS1SxuY