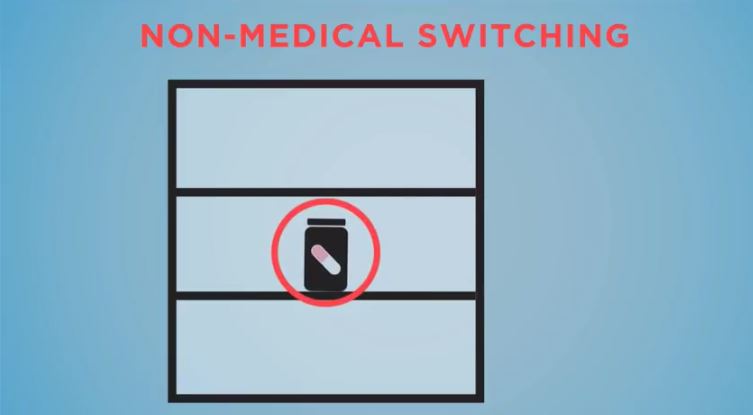 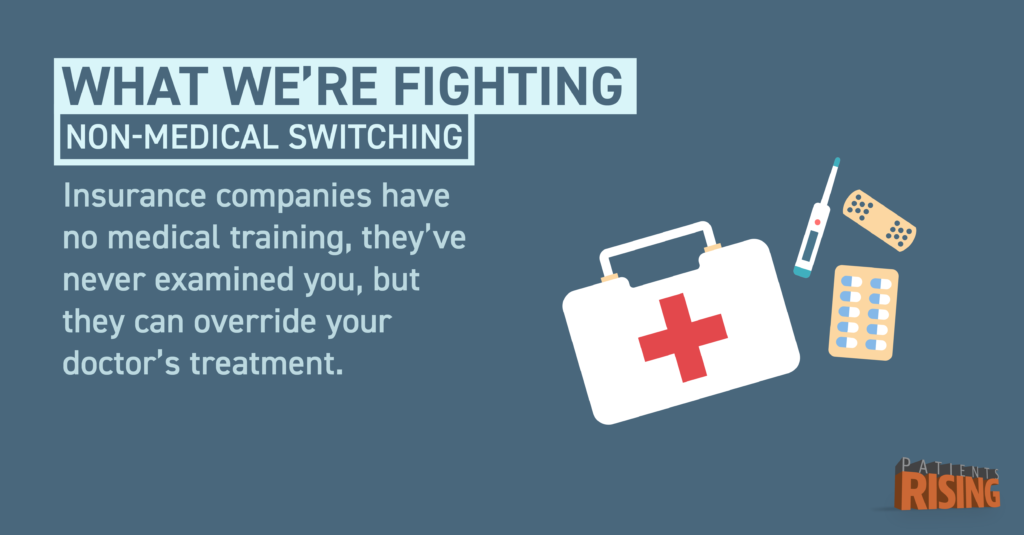 Patients have tremendous power to shape the health care debate…

…if we remain focused and united.

As we prepare for big changes expected next year in health care, we’re turning our attention to the ongoing problems where there is near universal agreement among patients — but little progress.

That starts with a serious problem that directly impacts patients’ health: non-medical switching.

Non-Medical Switching: What is it and how does it harm patients?

Non-medical switching is when an insurance company supersedes the decision of a patient’s doctor by forcing a patient to use a different treatment.

Insurers force this switch to a different drug by either dropping coverage or increasing the out-of-pocket cost of the drug after the plan year has begun. “Switch” doesn’t exactly convey the serious health complications and major side effects that result.

“When patients lose access to the therapy that stabilizes their condition, they may also lose the ability to manage their disease, facing re-emerging symptoms and new side effects,” explains U.S. Pain Foundation, a non-profit organization dedicated to serving those who live with pain conditions. “Patients may require visits to the emergency room, additional appointments with their physician, lab tests and hospitalizations as a result— making the “less costly” alternative an expensive option for patients and insurers alike.”

“Switching should only take place with the full knowledge and consent of the prescribing physician in consultation with the affected patient,” says U.S. Pain Foundation. “Insurers should not be playing doctor.”

According to a newly released survey by the Alliance for the Adoption of Innovations in Medicine, 92 percent of patients are opposed to “nonmedical switching,” in which insurers can force stable patients to switch from their current medication to a different drug.

“Many Americans are unaware of such practices,” Stacey L. Worthy, executive director of Aimed Alliance, writes at The Hill. “Yet, the consequences can be a hassle to deal with and, in some cases, detrimental to a patient’s wellbeing.”

The poll, which was conducted from December 3 to December 8, 2016, coincides with state and federal policymakers looking to reform insurance coverage, with a special focus on the Patient Protection and Affordable Care Act in 2017.

She adds, “There is an inherent absurdity that someone who never examined you would have the authority to override the decision of a trained medical professional with an intimate knowledge of your condition.”