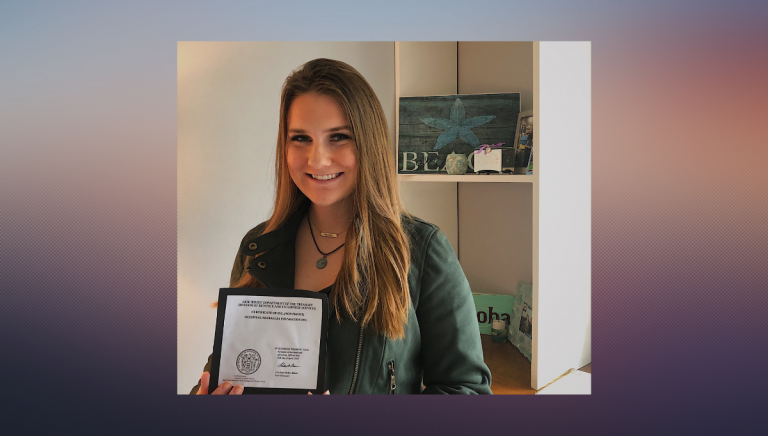 HOW I GOT HERE

My journey with Occipital Neuralgia (ON) began 5 years ago, when I was 13 years old.

My teammate and I collided during a softball game while attempting to catch a fly ball. The collision resulted in me getting a concussion, neck sprain, and a whiplash injury. My headache began later that day and has been there ever since. As days passed my symptoms got worse, my headache became constant. I experienced sensitivity to noise and light, blurry vision and radiating bilateral arm pain.

They evaluated me at the hospital and subsequently at a concussion center. I was advised to “rest my brain” for the next 3 days and I “should be fine”.

PROGRESSION OF MY PAIN

The pain was not getting any better. It eventually began spreading from my neck, up towards my forehead. I would get severe pain, almost like an electric shock, through my head, along what I later learned was the occipital nerve. Doctors told me I was experiencing Post Concussion Syndrome. Life became physical and vision therapy twice a week while seeing numerous specialists in between.

My imaging results were always normal, but the pain I was suffering from was anything but. Doctors began telling my parents “she should be better by now” and that my pain was “in my head” or ‘just anxiety’. I was even accused of faking my pain because I liked the attention. Years later I found out that doctors couldn’t see the source of my pain because Occipital Neuralgia does not appear on imaging.

After a couple of years without answers, we decided to see a local sports medicine doctor. He did an examination and said “I can’t tell for sure, but I think you have Occipital Neuralgia.” He further explained that his cousin was a neurologist and had once told him the symptoms of ON. It was a surprising way to receive a diagnosis.

Occipital Neuralgia (ON) is a chronic pain condition that is caused by inflammation or compression to the occipital nerves, usually as a result of a concussion/whiplash injury.   The pain can be bilateral and/or unilateral or isolated to the front and/or back of the head.

​When searching “Occipital Neuralgia” on the internet, ON is often described as a headache caused by tightness in the neck that can be treated by doing light stretches, massage, and taking oral medications.  This description must refer to the more mild cases. At the Occipital Neuralgia Foundation, we have met people from all over the world who are suffering and those treatment options don’t typically provide long lasting relief and in some cases make their symptoms worse.  The pain can be intermittent or can become chronic.

Following the ON diagnosis, I returned to my previous therapies, and added massage therapy. I tried a variety of medications – muscle relaxers, steroids, antidepressants, anticonvulsants and nerve pain medications. Nothing was helping, and the side effects of the medications were overwhelming.

There were few doctors that had ON listed as a speciality, and they wouldn’t see me because I was still considered a pediatric patient. I began seeing a local pain management doctor and a different neurologist/headache specialist. Nerve blocks were recommended to reduce the pain, but it actually made my pain worse. I could no longer attend school. Lights, noise, reading, just about everything worsened my head pain. I felt very alone.

Treatment of occipital neuralgia aims to alleviate the pain; however, it is not a cure. Interventions can be surgical or non-surgical.

Internet research revealed that in severe cases people have had nerve decompression surgery to “free up” the occipital nerves. We consulted with a local physician, but were discouraged to hear that he had performed less than 100 of these surgeries. This led us to a surgeon out of state who had performed thousands. Unfortunately, both doctors were out of network and we were told that the surgery is typically deemed ‘experimental’ by most insurance companies, meaning that we would have to pay for most, if not all of the surgery.

We traveled to ‘The Washington Nerve Institute’ in McClean, Virginia for a consultation. The doctor explained his frustration with the lack of awareness in the medical community about ON. In his view, many of the stretches and exercises I was doing for years were actually stretching already inflamed and irritated nerves, making my pain that much worse! This explained why physical therapy felt good in the moment, but why I always ended up in much worse pain afterwards.

He explained that diagnostic nerve blocks would need to be done to help determine if I was a candidate. The nerve blocks gave him the information he needed and we decided to go forward with the surgery. He made no promise of success, but his statistics were favorable that I would find relief to some degree. The surgery revealed that I had a split nerve, a nerve wrapped around another nerve, and a lot of scar tissue, muscle, and fascia compressing the occipital nerves. None of this could be seen on imaging. The surgery provided about 4 months of relief, but eventually my symptoms returned. I was devastated.

I was now approaching my senior year of high school and had to return to home instruction. We eventually returned to my surgeon in Virginia to discuss what our next step should be. The next surgical option would be excision, where the occipital nerves would be cut. Excision is final and leaves part of your head numb. We were told it could be helpful or sometimes make the pain worse.

As an alternative, he suggested neuro stimulators. We began our search. Neuro stimulators are the same as spinal cord stimulators, just placed in a different location. The battery pack is implanted in the chest and the leads (wires) run through the occipital area and/or the forehead. In my case, I needed leads in both areas since my pain was in the front and back of my head. A remote is used to adjust programs in an attempt to interrupt the pain signals. This is yet another ‘experimental’ surgery.

Reed Migraine Center in Texas specializes in these neuro stimulators, so we traveled there several times. The trial was successful and we returned a few months later for the permanent stimulator. Unfortunately, this relief was also short-lived and lasted about 3 months.

I still have constant head and neck pain, but overall I can function better. It was explained to me that sometimes, regardless of the stimulator settings, the nerves find a new way to reach the brain. Unfortunately, this seems to be what has happened in my case.

THERE WAS A NEED, SO KAYLA FILLED IT HERSELF

I continue to seek options to lead me to a pain free life. There is not enough information known about this condition in the medical community and the treatments are often ineffective. I established “The Occipital Neuralgia Foundation” and have met so many people suffering all over the world.  We share similar stories – delayed diagnosis, ineffective medications, treatments, and surgeries and financial challenges due to the “experimental” nature of what is available. I look forward to the day that we all find permanent and lasting relief.

Kayla Smock, President and Founder of the Occipital Neuralgia Foundation, introduces us to her rare disease and challenges us to care.  #PatientsRising, #PatientVoicesofValue Click To Tweet

Kayla Smock is a freshman in college pursuing a degree in health science. Once she obtains her bachelor’s degree, she plans to go on to become a physician assistant. Kayla created a nonprofit organization to bring awareness to Occipital Neuralgia, a chronic pain condition she has dealt with for many years. The Occipital Neuralgia Foundation was only incorporated this past year, but has already made a significant difference in the ON community. Since Kayla is no longer able to play sports due to her chronic pain, she began coaching a little-girls softball team. Besides coaching, she loves the beach, camping, and spending time with her family and friends.

Links for the foundation:

The lack of expertise in the treatment of occipital neuralgia leaves patients like Kayla traveling long distances and putting faith in unproven therapies that insurance often will not cover. Unfortunately, the success of these therapies are hit and miss or impermanent.

The occipital neuralgia community is fortunate to have advocates like Kayla and the Occipital Neuralgia Foundation providing support and education, and fostering research into the causes and treatments. Under her leadership she formed a partnership with Patients Rising to create a survey tool to better understand ON and accessed the Patients Rising Stories program so the ON community can tell their stories on a platform designed for advocacy.

To stay involved please sign up for the Occipital Neuralgia Foundation newsletter and visit the Patients Rising Stories site and telll your story today, so that tomorrow ON will be better understood by providers, and policy and law makers.

Read about Kristine and Candace and their fight to get supposedly “experimental” treatments covered by their insurance.

Read about Bari Gordon and how her brush with death from a rare disease motivated her to become an advocate.