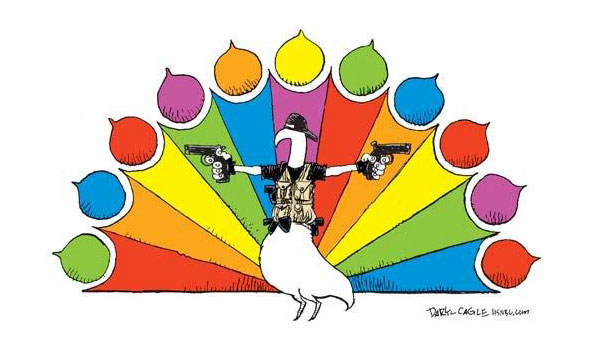 Proud as a Peacock, NBC News is the latest media outlet to blast both barrels at the price of medications, land some buckshot on pharmaceutical companies, and leave the entire rest of the players without a scratch. Ready, fire … aim.

We welcome a reasoned discussion of health costs based on facts. But if you watch this report — and, unfortunately, many others — we only get glimpses of the rest of the story.

We had to hear about — again — the unctuous Martin Shkreli, a financial dealmaker out to make money. Why is he represented as something else? As the CEO of Biogen said, “Calling Shkreli’s company a research pharmaceutical company is like saying a loan shark is a bank.” NBC’s featuring of Shkreli only further confuses the fact he’s not a leader in the world of science, research or, lord knows, patient advocacy. He’s a fringe player who pulled a fast one, got caught and is now dealing with the consequences.

For this report we learn about 27 year-old Klyn Elsbury, who is living with Cystic Fibrosis, a life-threatening, genetic disease that causes persistent lung infections and progressively limits the ability to breathe. She is in and out of the hospital every few weeks, often staying for a week at a time.

What NBC fails to point out is that the drug she has been prescribed, Orkambi, is a targeted therapy for cystic fibrosis patients ages 12 and up who have two copies of the F508del mutation in their CFTR gene.  Approximately 90 percent of people with CF have at least one copy of the F508del mutation, and about 48 percent have two copies.  We found out from the Cystic Fibrosis Foundation website that there are 30,000 people in the United States living with cystic fibrosis, 70,000 worldwide.

If you do the math like we have, you will come to find out that Orkambi is presently approved to help slightly less than 15,000 people in the United States and 30,000 people worldwide.  There are more than 1,800 known mutations of the disease, so imagine if you are a patient waiting for a cure for one of the rarer mutations?  Who is going to develop a treatment for your mutation when the one delivering benefits for 15,000 people is being attacked on NBC News?

NBC would have been better off interviewing our friend Peter Pitts of the Center for Medicine in the Public Interest. He says insurers and pharmacy benefit managers — not drug companies — are the ones who determine what patients pay for medications. We all know for certain that insurance companies aren’t paying $250,000 per year for the drug. Shame on NBC for leaving that out.

I am also baffled that Dr. Brian O’Sullivan, a cystic fibrosis specialist at University of Massachusetts Medical School, thinks this Orkambi should cost $10,000 per year? I’m not an economist, and neither is Dr. Sullivan. But doesn’t NBC News have access to any? Did they lose CNBC’s number?

When you are treating and innovating for a small population of patients, the prices will initially be high. I rarely see any reports that focus on this fact.

At the end of the story, we find out that the insurance company will, in fact, pay for Klyn Elsbury’s Orkambi. Why? It’s right there in the report: Orkambi “keeps her out of the hospital every few weeks, often for a week at a time.”

Since insurance covered her innovative therapy – this time – this is one patient with the opportunity to thrive. Her life is worth it.

The fact is that medical innovation is adding years to the lives of people with cystic fibrosis. In the 1950s, a child with CF rarely lived long enough to attend elementary school. Because of breakthrough treatments in research and care, people with CF today are realizing their dreams of attending college, pursuing careers, getting married and having families. Is that good news not right for NBC News?