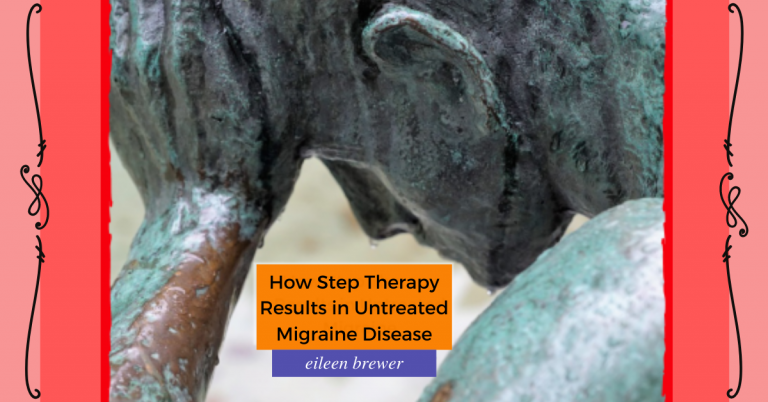 Doctors know very little about what it is like to treat migraine disease in patients. Most doctors get about an hour of education about all headache diseases in medical school and they may not encounter treatment for the diseases at all during rotations in residency programs. If they do, they may encounter one migraine patient and even then, maybe only once for 7-8 minutes.

Neurologists don’t get much more time on the topic either. Migraine disease is difficult to treat because it doesn’t follow a normal path like MS, epilepsy, and Parkinson’s. Because of this, many migraine patients do not get effective treatment, and inadequate treatment leads to progression of this disease from episodic to chronic. Once chronic, patients rarely go back to being episodic.

MIGRAINE and the CHEAP, INEFFECTIVE TREATMENTS

At least 15% of people with migraine disease are still being prescribed opiates as a first line treatment. The American Headache Society states that 50% of ER visits use opiates to treat headaches. This is due to lack of education, but also due to other migraine treatments being more difficult to get through insurance companies. Opiates are cheap, but dihydroergotamine (DHE) is expensive.

Part of this is due to the fact that drug companies are raising prices on older drugs that they still manufacture. DHE is a drug that has been around since the end of World War II, and it used to cost people about $15 a month. Suddenly it’s costing hundreds or even over a thousand dollars. Triptans (selective serotonin uptake antagonists) are often covered, but not necessarily in formulations that we want. The pills are cheap yet the faster acting nasal spray is not covered or is very expensive. While it is saving insurance company money, it’s costing our country billions in health care and lost productivity.

Preventive medications are a whole other topic. We have some new and interesting treatments for migraine disease called Calcitonin-gene-related peptides receptor antagonists (CGRPs). Right now, most insurance companies including Medicaid & Medicare are not covering these drugs. The Institute for Clinical and Economic Review (ICER) made the recommendation they not be completely covered claiming there to be plenty of effective treatments for migraine disease, especially for episodic migraine. Insurers followed that advice, unfortunately.

Admittedly, CGRPs are not the magic bullets many were hoping they would be. They seem to effective in reducing overall migraine days in only about 30% of people. However, that’s still 30% with fewer migraines! Right now, many people have access through the drug manufacturer’s co-pay programs and it is great. However, starting this month (June of 2019) people are going to start being released from those co-pay assistance programs and are going to have to figure out how to afford drugs that cost about $1400 a month. The result? Most people will have to stop taking them and plunge back into the icy, dark waters of pain, sheltering themselves away from the light, sound, and smells that otherwise trigger them constantly.

These drugs have given some people their lives back, and taking them away means taking their lives away. Insurance companies say that we have other treatments like Topamax and Botox, although access to these prescriptions is also limited and they aren’t cheap either. Botox can cost $500–$1200 per vial and Topamax runs about $6000/yr, so insurers use step therapy to block access.

DERAILED BY MY INSURER – STEP THERAPY

In 2018, I FINALLY got approved to try Botox. Botox for migraine is a treatment that was approved over 10 years ago. It took me ten years to jump through all the hoops my insurance company required of me. What hoops? First I needed to try and fail both an antiepileptic drug and an antidepressant ‘within two years before I could get Botox’. Never mind that I had already tried and failed both in the past. But it had been more than two years so I had to try them again.

I started the antiepileptic, Topamax (again) but then got pregnant so I had to stop it. I couldn’t take it while breastfeeding and then I had a second child so it was years before I could try the drug (that I had already tried and failed) again. During those years there was no approved migraine treatment for use while pregnant, so I went fully untreated.

Once I finally got on the Topamax again, my hair started to fall out. Food became unappetizing and foul-tasting and I had negative effects on my memory – both known side effects. Worse, it didn’t help my migraine at all, just like it hadn’t the first time I had taken it – something my doctor and I already knew.

Having failed that, I was expected to try an antidepressant but that last time I had tried one I experienced the known side effect of “suicidal ideation”. So instead, in good faith and under my doctor’s direction we attempted a beta blocker rather than an antidepressant. My insurer did not accept that as a valid ‘step’ in the step therapy so denied me AGAIN. It wasn’t until we had appealed, then appealed again, that I was finally approved for the Botox therapy. Years and years without a working treatment.

I started the Botox. I did not show improvement by my first follow up visit, so my insurance company decided that I couldn’t have any more. They claimed the Botox treatments weren’t working though it says right in the prescribing information for Botox that it takes 2-3 consecutive doses for it to work for most patients. So, I had to go back through the appeals process again to get another dose of Botox. That took more than a month, which meant that my doses of Botox were no longer consecutive and so would be less likely to work.

When the second dose didn’t work (not surprising because of the delay) my insurance company denied it again. I couldn’t get them to approve more than one dose at a time and I finally just gave up because it was never likely to be effective for me as a result of the step therapy.

My doctor’s office had spent sooo many hours working on this Botox case for me only for it to fail because the insurer wouldn’t follow the doctor’s direction. And I’m one of many migraine disease sufferers. They spend hours and hours doing this for each patient! It is costly and ineffective because insurers won’t let the drug be used as directed.

Doctor’s time is better spent practicing medicine, not paperwork. The insurance company wasted money. They purchased two rounds of Botox that had no hope of being effective.

My insurer says, “I never go to the hospital so I’m clearly not impaired enough”. Is that the right measure?

There are 40 million people living with migraine disease. Four million of these are chronic, meaning they get more than 15 migraine attacks a month. Why derail the effective treatments? I wonder what the expense of four million people suddenly showing up in the ER 15-days a month be? Pretty sure 60 million ER visits is more expensive than making treatments available in the first place. Is that what it would take?

Eileen Brewer brings her skills as an event coordinator to the headache patient community. She serves on the board of Clusterbusters as the Vice President, is the Director of Special Events for the Coalition for Headache and Migraine Patients, sits on the National Headache Foundation’s Patient Leadership Council, and is the Program Director for Migraine Community Groups. In her spare time, Eileen is the president of a preschool and a Girl Scout troop leader. She lives in Columbia, Maryland with her husband, two children, father-in-law, and two cats.