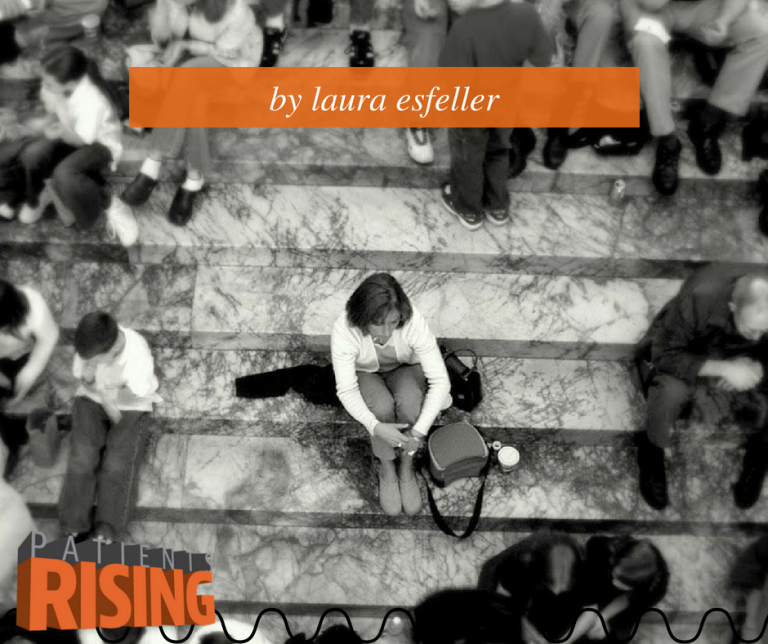 It was five days after my 29th birthday, and I was laying in a hospital bed in my local emergency room, and the ER doctor was giving my husband and I life-shattering, world-altering news… I had a massive tumor on my right kidney, and I’d need to have surgery to remove it.

But, how did it come to this?

I had just started a new job, which required me to have an annual physical for my insurance. My blood work showed my alkaline phosphatase levels were abnormally high. I asked my primary care doctor to explain. She said that she was more concerned about my slightly elevated cholesterol levels. My cholesterol levels came down, but my alkaline phosphatase levels did not.

I began getting more frequent and more severe migraines. My primary care doctor sent me to a neurologist. Both were concerned about my blood pressure, but I was overweight and had a family history of high blood pressure. My neurologist said it was hormones and stress. He put me on medication. That helped some, but didn’t alleviate it. I changed my birth control, desperate to be relieved of the migraines that were tormenting me. I’d go home from work early, too sick to function. Then I’d miss out on events and activities with my husband and my kids, desperately hurting and nauseous.

Nothing I did seemed to make it go away. My neurologist ordered bloodwork, and saw that the inflammation levels in my body were high and again, that alkaline phosphatase level was high. I asked him about it, and he said that “if something were seriously wrong, it would be off-the-charts abnormal.” It wasn’t, but it was still hundreds higher than it should have been.

I began to experience my heart racing in my chest. I’d get pains in my abdomen, and have to take naps in the break room on my lunch break. I was exhausted and I felt terrible. My doctors said I was the typical stressed out, overworked mom, and I accepted that. I began thinking I was a hypochondriac.

Then came another physical for work. The nurses took my blood pressure three times because they couldn’t believe how high it was. They sent me for condition management with the nutritionist, who advised me to do the usual – lose weight, watch what I eat, etc. I told her I had already been doing that. My primary care doctor ran some bloodwork “just to be sure.” It showed that my alkaline phosphatase level was even higher, and now my red blood cell count was abnormally high. She gave me my blood work results and said nothing was wrong. When I asked her about the abnormal red blood cell count, and she said I could have “just had an infection” when they drew my blood. I didn’t remember having an infection. I figured there couldn’t be anything seriously wrong if they kept just sending me home with no real answers.

We were all wrong.

That was December, and in May, my legs suddenly ballooned to the point that I couldn’t wear pants comfortably. I went to the ER after my primary care doctor gave me Lasix and said I should get a CT scan within the week. I didn’t want to wait. The ER performed a CT scan, only to find a 12 centimeter tumor on my right kidney. It had blocked my circulation from my legs back up to my heart to the point that my legs were collecting blood, which is why my legs had become so swollen. Right out of the gate, I had advanced renal cell carcinoma, at barely 29. It seemed so sudden, but the reality was the cancer had likely been there for years, growing undetected.

While kidney cancer is uncommon in adults under the age of 45, it’s not uncommon for teens and young adults to be diagnosed with metastatic disease because their diagnosis has been delayed. In fact, according to the 15-40 Connection, a nonprofit focused on teens and young adults with cancer, survival rates in this age group have barely improved since 1975 while every other age group has shown significant increases in survival. This is because so many in the medical world tend to overlook the possibility of cancer in young adults.

I’ve had more than one physician in the over two years since my diagnosis say, “Looking back, it all adds up now.” They’ve also said that had I been 60 years old and presenting with the same symptoms, I would have been screened for a kidney or bladder tumor much sooner.

A NEED TO LOOK AT KIDNEY CANCER DIFFERENTLY

I recognize that I am a statistical abnormality. Many of my doctors and nurses will likely never see another case like mine for the rest of their careers. But that’s cold comfort when I almost died because my symptoms weren’t making sense for someone my age. Just because it wasn’t likely doesn’t mean I didn’t have cancer, and it doesn’t mean there aren’t other patients out there like me.

I once read an autobiography about a political journalist who died of cancer. She described how she was sick for years and her doctors didn’t have a clue. I thought, “How could that possibly happen?”

Laura Esfeller is a survivor of papillary kidney cancer resulting from a little-known genetic condition – hereditary leiomyomatosis and renal cell cancer (HLRCC). She serves on the Kidney Cancer Patient Advisory Board for KCCure. Laura received her B.A. in mass communication from Louisiana State University and her M.A. in strategic communications from National University. When not working as a patient advocate, she works in marketing for Caesars Entertainment. Laura resides in Henderson, Nevada, with her husband, daughters, and their fluffy cats.