Across the country, patients have been speaking out against the Centers for Medicare & Medicaid Services’ experimental reimbursement model.

When the CMS made the announcement back in March, a diverse coalition of patient advocacy groups, medical providers, and innovators warned that it would set a dangerous precedent for patient care. As proposed, the CMS’ experimental model would put formularies and accounting spreadsheets between patients and their doctors.

All of our emails, blogs, Tweets, Facebook posts and letters seem to be working. Jennifer Haberkorn and Sarah Karlin-Smith write in a story offered exclusively to Politico Pro subscribers that members of Congress are taking notice:

“Congressional Democrats are getting pressure from the drug industry, a politically powerful lobbying force, and more than 300 physician and patient advocacy groups, such as the American Medical Association and Patients Rising, which are strongly opposed to the program as it is structured now.”

For those who live outside the Beltway, Politico is considered the country’s leading news source on Washington politics. If they’re writing about it, it’s a sign that our advocacy is working. Let’s keep at it!  To raise you voice and learn more visit CancerExperiment.com — powered by our friends at the Community Oncology Alliance.

“Where a hospital has a monopoly,” says Cynthia Cox of the Kaiser Family Foundation, “then prices tend to be much higher than those areas where there are multiple hospitals.”

That’s the take-away quote from a detailed review by NBC News of a new study on the variation in medical prices based on geographic regions. The Health Care Cost Institute recently found that there is no consistency in the cost of medical procedures.

The study found that cost differences were greater than the obvious geographic boundaries. It makes sense that medical care in a more remote and isolated state like Alaska is 2.6 times higher than the national average.

But, the study also found that a knee replacement can vary greatly by state. Consider these prices for the same procedure, which has a national average cost of $33,000:

“Prices for medical services varied more than threefold in certain instances,” the team wrote in the report, which was published in the journal Health Affairs.

A map shows the average cost of a doctor’s visit based on a new study by the Health Care Cost Institute. 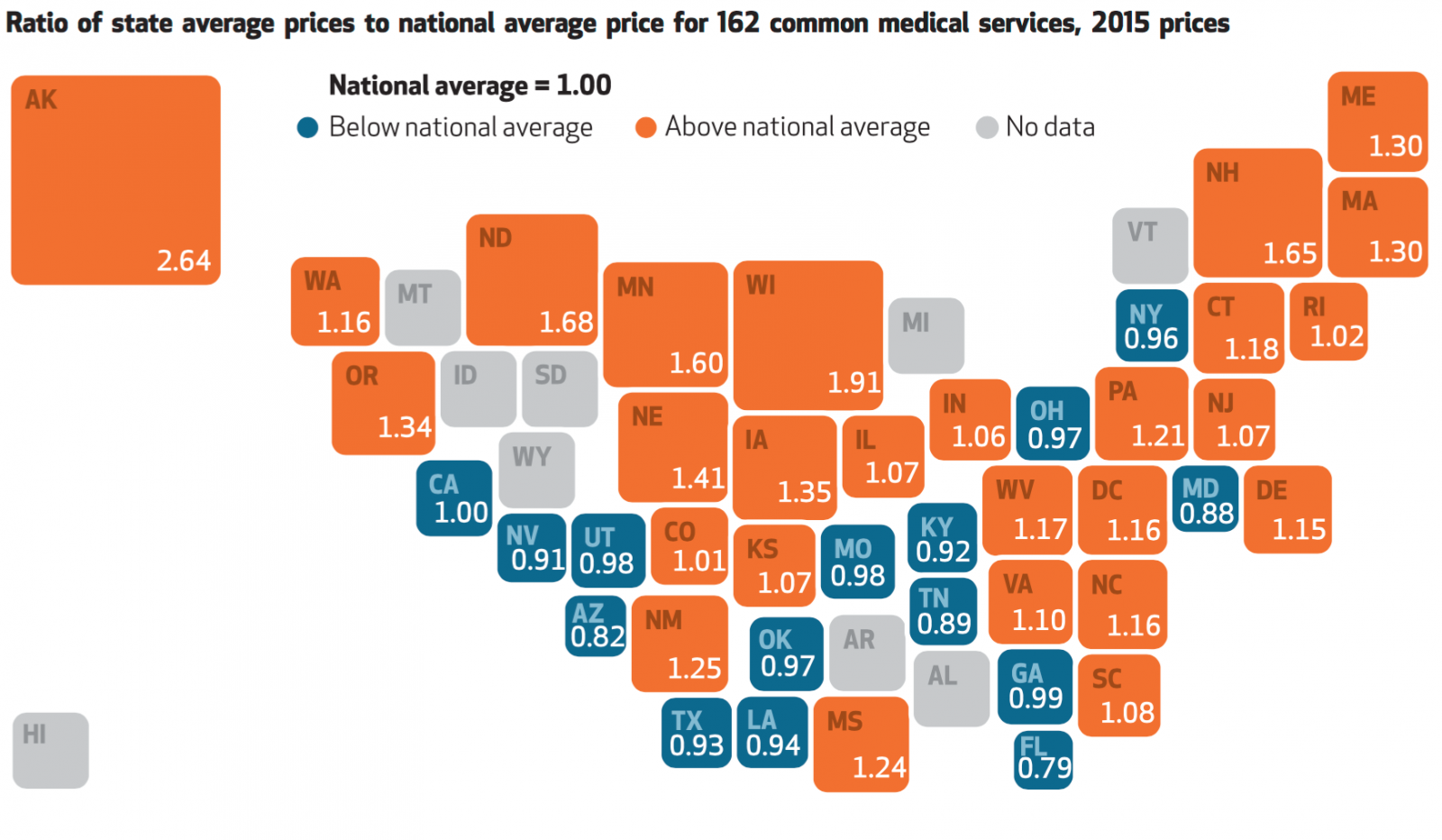 Stand Up To Cancer: Catalyst

Stand Up To Cancer has launched the latest phase of its collaborative science model, reports Eric T. Rosenthal, a special correspondent for MedPage Today.

Catalyst is the latest collaboration by Merck, Bristol-Myers Squibb and Genentech, which will provide new pharmaceutical compounds to researchers for study. The American Association for Cancer Research (AACR) will help manage requests for proposals with a panel of industry and academic experts evaluating proposals.

“The Catalyst program is a perfect fit with the SU2C mission of accelerating the pace of groundbreaking translational research that provides new therapies to patients quickly,” Sung Poblete, RN, PhD, president and chief executive officer of SU2C, said in a press announcement. “This will be a nimble program that will help speed up the rate at which we discover what works.”

Since 2008, Stand Up To Cancer has provided grants “to multi-institutional groups of scientists who work collaboratively, rather than competitively, to develop new treatments quickly in order to save lives now.”