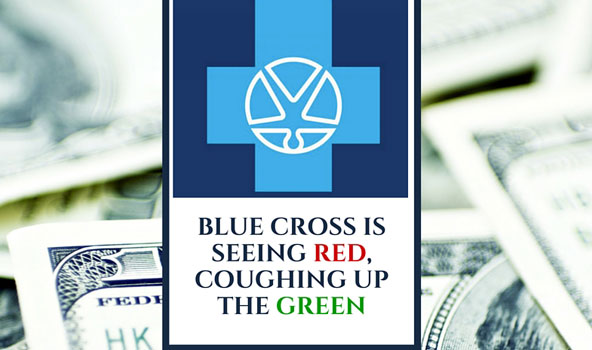 Blue Cross is seeing red, coughing up the green.

Breaking news from California reminds us that the old adage “Always read the fine print,” is very good advice. But how many of us do? If your insurance company is Anthem Blue Cross, you might want to reach for that policy right now and look for the sections in small font.

But clear the table first, in case you feel like throwing something heavy.

Why? This week, one of those things was heaved and hit Anthem right between its blue eyes, as it settled a lawsuit by agreeing to stop altering patient policies in the middle of a year that increases consumer cost. The reimbursement will run to nearly $8.3 million to about 50,000 customers in California.

Interesting quote here from one of the patient plaintiffs, Dave Jacobson of Santa Monica: “My deductible had become a moving target. It’s as if Anthem Blue Cross changed the rules of the game in the middle of the game.”

Eric Taub of Westlake Village and his wife saw their deductibles increased $250 in the middle of the year and without warning: “It’s like you’re playing a game and you think you’re at the goal, and they move the goal post another 10 yards.”

The reports add that Anthem argued that its contracts allowed for these sorts mid-year price increases … provided the insurance giant provided “proper notice” of the changes. Maybe this is how you get to be a 10-figure corporation: $250 at a time.

But let’s dig deeper: Do the rules allow for this? Or not? Is Anthem Blue Cross only willing to charge you more money – but pay up when caught? No wonder public approval of much of the health care world is so low.

The good news is that this is a story of the awesome potential of patient power. If patients aren’t rising, they can’t stand up for themselves and others. This shows for sure that when they do, nothing – not even a multi billion-dollar insurance giant – is stronger. The climate for further and more meaningful reform is truly at hand.