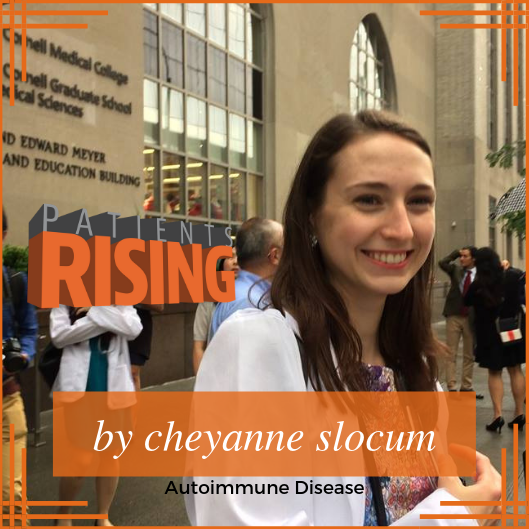 Me and My Autoimmune Disease

“Mom, my blood tests came back. My ANA is positive with a high titer.”

Mom’s question was a good one, “What does that mean?”

There I was eating my lunch, looking at the results from my latest blood tests through my patient portal. I had recently seen a hematologist for counseling after getting diagnosed with hereditary thrombophilia. I didn’t expect that the “just in case” laboratory tests would turn up anything. But it did – a positive anti-nuclear antibody (ANA) with a very high titer.

A positive ANA is an indication that autoantibodies are present. Autoantibodies are produced by the body to attack its own tissues. A titer is how many times blood needs to be diluted before a test stops being positive. Mine was sixteen times higher than normal. Not good.

The most common autoimmune disorder characterized by a high ANA is Lupus. Although Lupus is much more manageable than it was even a few decades ago, it is unpredictable. Luckily, I’m just a block away from the top rheumatology center in the country, The Hospital For Special Surgery. I had tests there to confirm the titer and try to find an answer for this unexpected result.

As I waited for the results, I couldn’t help but think of all the symptoms that had been cropping up since college:

I found comfort that this strange collection of symptoms might be explained. Having a history of a mental illness, I had never talked about these symptoms with anyone. I had been judged enough by health care providers for other medical concerns. I didn’t want to come off as being any more neurotic than I already was.

But the remaining classical tests for Lupus came back negative. Rather than happy, I was disappointed. I had thought I finally had an answer to all these secret things I had been dealing with for years. Instead I was left right back where I started.

Or so I thought.

There was one other lab abnormality – a low C3. C3 is known as a complement protein.There are many complement proteins that work together in complicated ways to target pathogens. In autoimmune disease, they can bind to antibodies that the body produces against itself. It forms complexes that then deposit in the body’s tissues. Mine being low, along with the high ANA, indicated that my body was forming complexes and carrying out an autoimmune process. Basically, evidence my body was fighting itself.

My rheumatologist told me that it was possible that in the next 2-5 years my symptoms could develop into a more formal autoimmune disease, most likely Lupus. She also said there was a chance nothing would happen at all. The uncertainty was frustrating, but then many rheumatology diseases are not cut and dry; they are fickle in their presentation so it is hard to determine diagnostic criteria for them. So, I was in limbo.

WHY DOES HAVING A FORMAL DIAGNOSIS MATTER?

My lab values and symptoms also point to a condition called Undifferentiated Connective Tissue Disease (UCTD). UCTD is kind of an auto-immune catch-all for when symptoms don’t fit the criteria for any established rheumatologic disease (such as Lupus, Scleroderma, or Dermatomyositis). UCTD itself does not have any set diagnostic criteria, so experts can’t say if I have UCTD at this time or not but it is a coding that fits.

While having a diagnosis of UCTD would at least put a name to what is going on, it’s also just another label in an ever-growing list; one that others could use to limit my opportunities or be discarded as just another manifestation of my anxiety.

Recently, I began to notice my joint pain and night sweats getting worse. There were nights I would wake up and my sheets would be damp and my shirt drenched, the sweat dripping down my arms. Other nights, my knees would be so sore that I would have to sleep with a pillow between my legs to prevent them from touching. There was one morning were upon waking, all of the knuckles in my hands where red and inflamed.

My rheumatologist had me come into the office sooner than I was originally scheduled. The minute I walked in she looked at my hands and said “Yep, I can see the arthritis in your joints”. She started me on Plaquenil (hydroxychloroquine), an anti-malaria drug that is also commonly used in Lupus, Rheumatoid Arthritis, and other arthritic conditions.

Medical school is hard. Learning how to care for others while also caring of myself is a major challenge. I’m learning that to succeed in health requires the right healthcare team, support from friends and family, and the ability to both face my fears and realize my limitations. It’s tough but I’m ready.