The White House is urging Millennials to get health insurance.

Although enrollment in the Affordable Care Act’s individual marketplace doesn’t open until November 1, the Obama administration is already starting its outreach to younger Americans.

“Access to affordable, quality health care is critically important for young people as they reach adulthood and enter the job market,” the Obama administration explains in a recent blog post. “It gives them peace of mind that allows them to focus on their studies, helps them stay healthy as they join the workforce, and is vital to building a strong economy and a strong middle class.”

HealthAffairs.org notes that the Centers for Medicare and Medicaid Services is part of the action to enroll more “young invincibles.”

CMS also plans to coordinate with the Department of Defense to contact members of the military as they leave the military’s health coverage.

What the White House left out: the federal government desperately needs young patients to obtain health insurance in order to shore up the individudal marketplace by subsidizing the higher health care costs of older patients.

“Young adults help offset the costs of older and generally sicker people on the exchange,” the Wall Street Journal notes. “The sluggish enrollment pace of young adults is a factor behind rising premiums and defections by major insurers such as UnitedHealth Group Inc., which have said they’re leaving some state exchanges because they’re losing money.”

Analyst say that patients between the ages of 18 and 34 need to increase by a third in order to hit the overall target.

“If enrollment stagnates, there could be more insurer exits, triggering a debate about possible fixes to the law,” Larry Levitt, senior vice president at the Kaiser Family Foundation, tells the Journal.

Morning Consult says that the biggest push to enroll young patients will come via social media.

“The Obama administration will lean on a new social media network and mobile devices to try to convince more millennials to sign up for health insurance under the Affordable Care Act,” Morning Consult reports.

The social media outreach campaign will include advertisements on Twitch, a video streaming social media platform. Twitch reaches 10 million people daily with a core user age of 18 through 34.

In addition to more social media advertising, federal health officials have made improvements to marketplace websites to make it easier to shop and compare plans on mobile devices.

“We do share a commitment to the health of young people and a belief that they can do amazing things,” Health and Human Services Secretary Sylvia Burwell told attendees at the White House summit. “Young adults are still more likely than any other group to be uninsured, and that’s a huge missed opportunity.”

But, Will It Work? 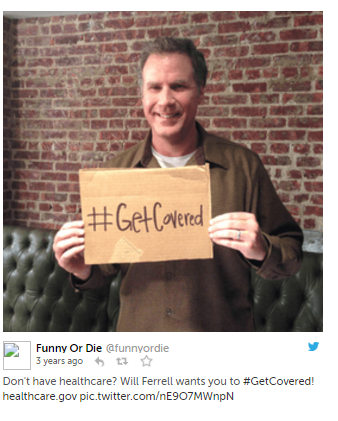 The big question: Will this major advertising campaign targeted at Millennials work?

Three years ago, the White House drafted celebrity endorsers to lead a similar Get Covered campaign. The roll-out included promotions by LeBron James, Will Ferrell and other stars.

The administration also raised and spent millions of dollars through non-profit organizations created with the purpose of communicating with young patients.

By December 2014, Politico observed that the publicity campaign had gone silent.

And that’s why we’re skeptical of the latest outreach effort. The entire campaign relies on selling Millennials on a product that doesn’t offer them value. Celebrity endorsements, social media, and advertisements on Twitch won’t work until the administration improves the law.

Instead of selling young patients on insurance, why don’t we work on improving the quality of health insurance?