A whopping 77 percent of patients believe that step therapy forces patients to receive ineffective treatments, according to our new Patients Rising survey published in partnership with CancerConnect.

Our national survey of patients with hard-to-treat cancers, entitled Health Insurance Barriers to Quality Cancer Care: The Real Life Experiences of Patients Undergoing Treatment, finds health plans routinely deny claims, drop drugs from the formulary after the plan-year has begun, and employ practices such as step-therapy or “fail first” to force patients to take less effective treatments despite the best advice from their physicians.

“This comprehensive survey shows that because of many insurance practices, too often patients don’t receive the type of care they pay for and deserve,” Jonathan Wilcox, Patients Rising policy director and co-founder, said at a forum hosted by Patients Rising during the 2016 American Society of Clinical Oncology (ASCO) annual meeting in Chicago, when the findings were first made public. “The insurance industry needs to listen to these constructive complaints and improve the overall quality of its service.”

Our survey was commissioned by CancerConnect, an online community for cancer patients, survivors and caregivers that regularly polls patients on their struggles and concerns. This survey involved more than 400 insured patients, 18 and older, who are undergoing treatment for three hard-to-treat cancers: melanoma, multiple myeloma and non-small cell lung cancer.

Highlights of the poll regarding patients’ concerns about access to new treatments: 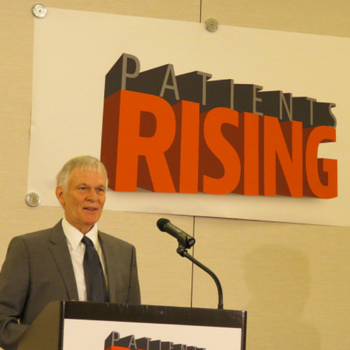 Our friends at the Partnership To Improve Patient Care (PIPC) share a powerful piece from myeloma patient Tom Hardy, who recently spoke out at our media briefing in St. Louis prior to the Institute for Clinical and Economic Review’s midwest meeting on May 26th.

“I am telling my personal story because on May 26 the Institute for Clinical and Economic Review, a group that develops cost effectiveness reports for new treatments, held a public meeting in St. Louis about their draft report on the value of multiple myeloma treatments,” Hardy, a member of the International Myeloma Foundation, writes. “I feel it is my duty to testify for all patients of this dreaded disease so that no treatments that demonstrate efficacy should be denied that extend or improve life because of monetary concerns.”

Like many patients, Hardy believes that treatment options shouldn’t be restricted by formulas and accountants.

“Medicine advances and saves lives as much by art as by science, as much by heart as by numbers, as much by curiosity as by money,” he says. “As a compassionate, civilized society, we must offer the best medicine we have to the patients who need it most without reservation. This is our legacy to generations to come.”

Although the study size was small, more than a third of patients who had impaired motor function experienced significant benefit from the treatment.

“Their recovery was not just a minimal recovery like someone who couldn’t move a thumb now being able to wiggle it. It was much more meaningful,” explains Gary Steinberg, the study’s lead author and chair of neurosurgery at Stanford. “One 71-year-old wheelchair-bound patient was walking again.”

Additional research will be needed to validate the findings. However, according to the San Diego Union Tribune, a recent study from the United Kingdom showed results that were “somewhat similar to the Stanford-led stroke treatment.”

Cancer patients are skipping a visit to the doctors office due to the high cost of care.

The University of North Carolina Lineberger Comprehensive Cancer Center found that 26 percent of adult cancer patients reported they paid more for medical care than they could afford.

Researchers surveyed nearly 2,000 patients from the N.C. Cancer Hospital aged 18 years and older, and who were 90 or more days away from their diagnosis.

“Patients with cancer can be on highly regimented therapy that can have significant side effects that need to be closely monitored,” said Greg Knight, MD, chief fellow in the UNC School of Medicine Division of Hematology and Oncology, who was the first author of the study abstract. “These patients represent a particularly vulnerable population because of the treatments they are receiving and require close monitoring for both response and known side effects of their treatment.”