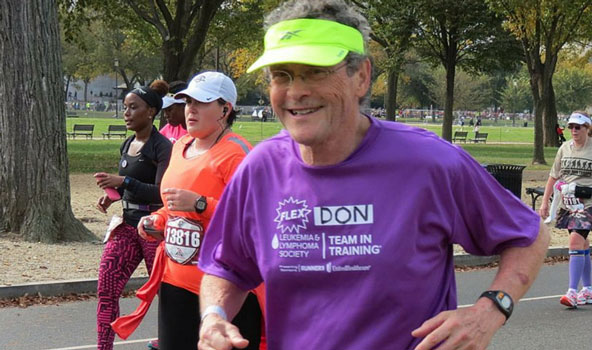 WASHINGTON & HOUSTON–(BUSINESS WIRE)–Patients Rising, a non-profit patient advocacy organization, today said Don Wright is closing in on his goal of running 100 marathons with cancer while on treatment. Don will run his 92nd marathon in Sugar Land, Texas, beginning and ending on the campus of the University of Houston on January 31st.

Don ran his first marathon on June 21, 2003. A few days later, July 2, his doctor confirmed he had multiple myeloma, a cancer of cells in the bone marrow. At the time his life expectancy was only three to five years, but thanks to new treatments, Don was able to continue running. In December, 2012, he became part of an elite group of runners who have completed at least one marathon in all 50 states. This month when Don runs his 92nd marathon with cancer, he’ll also celebrate his 75th birthday.

“I am pleased to help raise awareness of myeloma and related blood cancers, and to show that modern cancer treatments are not your grandfather’s chemotherapy,” said Don Wright. “Who would have thought it possible to treat cancer with just a pill? Medical advances mean even with cancer I can travel across country, and I feel well enough to race.”

For seven years Don was on an innovative oral medication for cancer. But multiple myeloma cannot be cured, his remission ended and now Don counts on newer regimens to keep his cancer on the run.

“Don and countless patients like him depend on research, investment and development to provide newer treatments so they don’t exhaust their options,” said Jonathan Wilcox, policy director and co-founder of Patients Rising. “That’s why here at Patients Rising we are fighting for continued medical innovation, and patient access to the treatments they need. Don shows us how far modern treatments have taken us, with a reminder that we still have a long way to go.”

Don also credits the support of his family. His wife, Ardis, and their adult daughter, Sarah, travel with Don and often run half marathons with him.

“When Don was diagnosed, he was told he’d have three to five years to live, but medical advances changed that,” said Ardis Wright. “Like Don, my father was diagnosed with a blood cancer in his 60’s and my parents lost their golden years together. But this spring, Don and I will celebrate 53 years of married life together. You could say we both benefit from his treatments. In fact, our whole family does.”

“I’m not running from cancer, I’m running against it, crossing each finish line ahead of cancer,” said Don who would like to complete all 100 marathons sometime toward the end of the year, and after that?