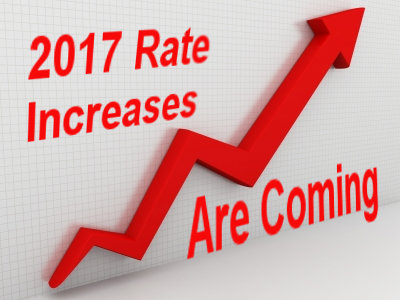 On Monday, the Obama administration officially confirmed that patients across the country will pay substantially higher insurance premiums next year under the Affordable Care Act. Nationwide, patients will see an average 25-percent increase in health insurance premiums.

“Before taxpayer-provided subsidies, premiums for a midlevel benchmark plan will increase an average of 25 percent across the 39 states served by the federally run online market, according to a report from the Department of Health and Human Services,” the Associated Press reports. “Moreover, about 1 in 5 consumers will have plans only from a single insurer to pick from, after major national carriers such as UnitedHealth Group, Humana and Aetna scaled back their roles.”

In some states, insurance rate hikes will be substantially worse. Rates will go up by an average of 30 percent or more in Alabama, Delaware, Hawaii, Kansas, Mississippi and Texas. The worst rate hikes might be in New Mexico, where the Blue Cross Blue Shield plan “has been allowed to increase rates 93% on their 2015 level,” according to the Wall Street Journal.

This isn’t exactly news. Regular readers of the Daily Rise have been aware of these insurance rate hikes for months. But, rate hikes are only half of the story. Patients also have fewer options, and in some cases, must buy insurance from a monopoly.

“Consumers will be faced this year with not only big premium increases but also with a declining number of insurers participating, and that will lead to a tumultuous open enrollment period,” said Larry Levitt, who tracks the health care law for the nonpartisan Kaiser Family Foundation.

Uninsured Patients: Show Me the Money

Before buying health insurance, patients are saying: show me the money.

According to Morning Consult, cost is the biggest barrier to uninsured patients signing up on the health insurance exchanges. The administration is hoping to address those concerns by targeting as many as 3.5 million uninsured patients to enroll for Obamacare in 2017.

“Of that group, the Department of Health and Human Services estimates that 10.7 million will be eligible for financial assistance this year,” Morning Consult notes. “Officials expect about one-third of that group to sign up for an Obamacare plan during the three-month open enrollment period beginning Nov. 1.”

Quote of the Day: No Longer Affordable

“The reality is the Affordable Care Act is no longer affordable for increasing numbers of people. It’s got some serious blemishes right now and serious deficiencies.”

ACA Signup Deadline Extended for Those Who Lost Their Health Plans

The Wall Street Journal reports that hundreds of thousands of patients whose health insurance plans have been canceled will be eligible for a special extended enrollment period.

“People with discontinued coverage who don’t pick a new plan by Dec. 15 will get assigned to a new plan that most closely matches their old policy. They will be informed of the new plan by the administration. Their new insurers will then send them a letter that includes the estimated amount of subsidy they are eligible for. These consumers are under no obligation and still have to pay their premiums to be enrolled in the new plan.”

“But for those who realize the deadline too late, there is some breathing room. Individuals whose plans are being discontinued next year because their insurer is leaving the exchange will be eligible for a special enrollment period, according to officials with the Centers for Medicare and Medicaid Services.”